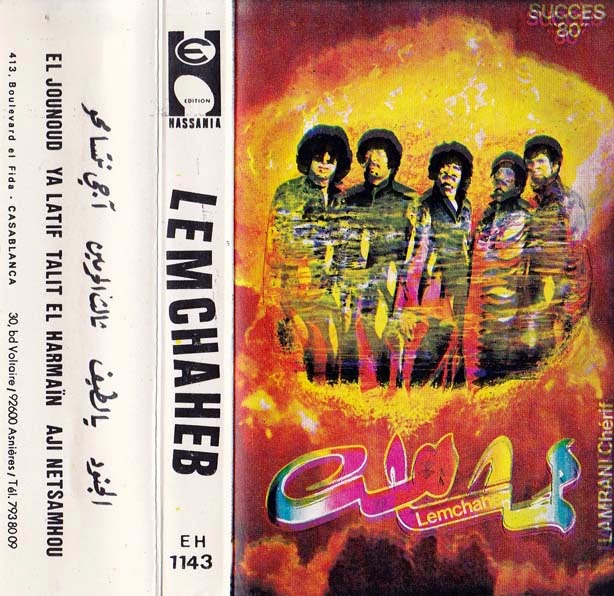 First off, let me say that in fact there is no good reason to think of Lemchaheb as the Jefferson Airplane of Moroccan folk revival groups. Further, as Hawgblog pointed out some time ago,


"compar[ing] artists who are relatively unknown in the West to Western artists, with the aim of helping Western readers make sense of said artists [gives] results [that] are frequently ridiculous"

On the other hand, sometimes these comparisons are so purposefully ridiculous as to be awesome! Hammer at the (too long silent) Audiotopia blog titled a number of posts in this fashion, many of which pop up on the blog's homepage as among his most popular posts. (The classic "Sadoun Jaber: Iraq's Pat Boone? - سـعـدون جـابـر." is my favorite!)

With regard to Morocco's folk revival groups, a comparison with classic rock bands has long been invoked by Western writers. "The Beatles of Morocco" most often refers to Nass el Ghiwane, though Google also reveals instances of Jil Jilala being so dubbed. "The Moroccan Rolling Stones" also refers most often to Nass el Ghiwane, though one can also find the term applied to Jil Jilala. Ridiculous? Ridiculously awesome? Or actually worthy of merit?

Although the music of these groups did not particularly sound like the Beatles or the Stones, there are a number of reasons why comparisons of folk revival bands with counterculture Euro-American groups make some actual historical sense. Philip Schuyler (1) notes the influence of Euro-American counterculture on Moroccan youth culture when these groups came into existence (early 1970s), as well as the use of group names rather than names of individual star performers. These groups' stage presentation (individual musicians at individual microphones, spread out across the front of a stage) seems modeled on that of rock bands. And even Nass el Ghiwane's combination of banjo, Gnawa guinbri, and drums hearkens to the bass-guitar-drums power trios of the Who or Led Zeppelin. Furthermore, Schuyler notes, groups like Nass el Ghiwane and Jil Jilala drew on the music of the brotherhoods (e.g., Gnawa, Jilala, Aissawa). Such brotherhoods have at times "served as the focus for protest and resistance to the government", thus becoming countercultural role models of sorts.

It's one thing to note actual historical influences from Western artists on non-Western artists, or parallels with similar musico-historical contexts. Such observations can be interesting and illuminating. It's quite a different thing to claim that the zeitgeist or oevre of one artist is equivalent to that of another artist from a Western canonical tradition.

What does it mean to say that Jil Jilala and/or Nass el Ghiwane ARE the Beatles and/or Rolling Stones of Morocco? It assumes an agreement about the salient characteristics and impacts of the Beatles and Stones. It also assumes that those characteristics are so iconic and universal as to set a standard by which Moroccan artists can be measured.

So what is it about Nass el Ghiwane/Jil Jilala that makes the comparison with the Beatles/Stones so attractive? Each are the two most popular groups of their respective traditions, working within youth-oriented popular culture. Both sets of groups broke the mold and redefined what a performing ensemble could be, influencing everything that came in their wake. Do we really need to use the Beatles and Stones as archetypes to make this observation? Does doing so, in fact, serve to belittle the value of NG or JJ, or Moroccan music? or Moroccan culture? I mean, if I told you Bob Marley was the Beatles of Reggae, I'm doing a disservice to Bob Marley and to reggae, and possibly insulting your musical knowledge at the same time, right?

The other dumb thing about using the Beatles/Stones metaphor is that it invites additional and worse metaphors for other musicians within the tradition. What of Lemchaheb, for example? When one speaks of only one band, it's Nass el Ghiwane. If one speaks of two, it's NG and Jil Jilala. If one speaks of three, it's NG, JJ and Lemchaheb (unless one includes the Soussi/Tachelhit/Berber groups). If we are to stick with our first-wave-of-British-Invasion-rock-bands metaphor, then I think we'd have to propose Lemchaheb as The Kinks of Morocco.

Wait - perhaps there is some merit in that comparison! Lemchaheb arose slightly later than Nass el Ghiwane and Jil Jilala, as the Kinks arose slightly after the Beatles and Stones.  Few would argue that the Kinks or Lemchaheb were more influential or mold-breaking than the Beatles/Stones or NG/JJ. Yet there is something singular and distinct about the Kinks and Lemchaheb that let them flourish as creative forces within a newly established genre.

The most comprehensive information in English about Lemchaheb seems to be this biography by Imad Abbadi (who appears to be the author of several very good Amazon reviews of Moroccan music in the early 2000's). The author points out that, unlike JJ and NG, Lemchaheb did not draw on folk and religious sources for their compositions. From a purely musical point of view, I'd also add that Lemchaheb drew on non-Moroccan sources more liberally than JJ and NG (use of non-Moroccan instruments like bouzouki, some use of polyphony/chords here and there, and collaboration with the German rock band Dissidenten.)

But to buy into Lemchaheb being the Kinks, one has to first buy into Nass el Ghiwane and Jil Jilala being the Beatles and/or the Rolling Stones, and really, I don't want to go there. There are so many elements of each group's story that do NOT hold up to comparison. I mean, did NG or JJ have a prancing lead singer? Did one group break up early and the other continue on for decades? Did either sing a lot of love songs? Do class differences exist and are they relevant? Is one group clearly more blues/roots-oriented and the other more pop-oriented? Is NG's Boudjemâa the Brian Jones of Moroccan folk revival bands, or the John Lennon? And on the flip side, did the Beatles or Stones come together in a theatre troupe? Did they ever swap bass players? Did either have a female member?

So, rather than assert and stand by the Kinks analogy (to which there is some merit but which rests on an uncomfortable set of assumptions about the importance and universality of the first wave of British Invasion rock bands), I will instead propose that Lemchaheb are the Jefferson Airplane of Moroccan folk revival groups, for the following spurious and superficial reasons: 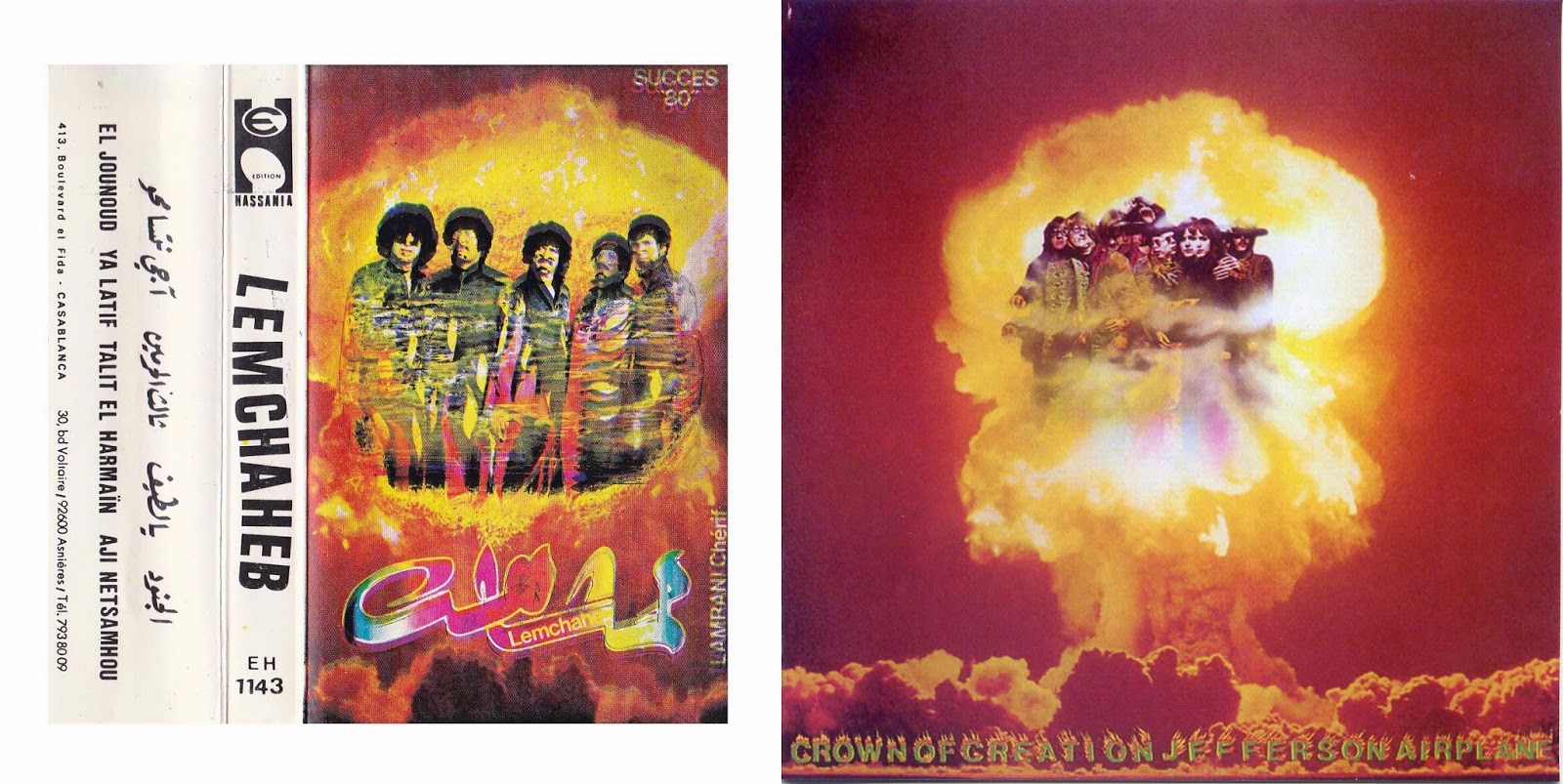 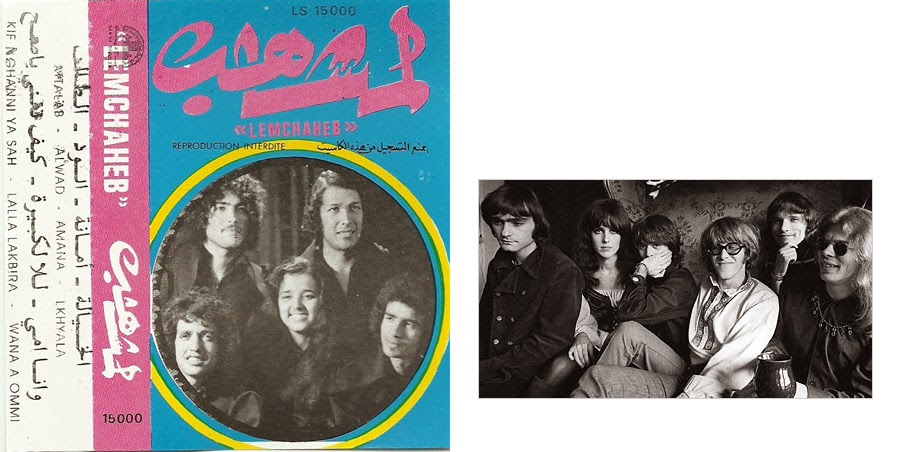 I hope you enjoy this fine Lemchaheb album more than my convoluted musings. Thanks to Nathan Salsburg for another swell tape rip! 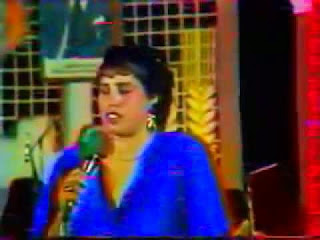 Here's one more old Najat Aâtabou tape for ya. This is the last one I own with her old line-up of oud and bendir-s. I wish I knew the name of the left-handed oud player who appears in the early Najat video clips I see online. I assume he's the same one who plays on these early-mid 1980's albums of hers. He always sounds great. Can anyone identify him? 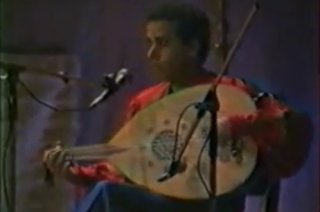 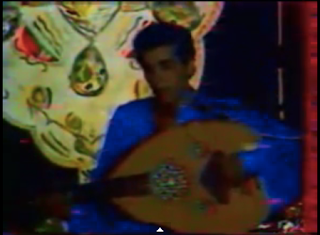 I don't have a j-card for this tape, but the cassette shell is from Edition Hassania. "Ditih" and "Wardat Lejnane" appear on the out-of-print CD "The Voice of the Atlas", whose notes indicate that the songs date from 1986 or 1987. The song "Lillah ya S'haba" also appears on Najat's orchestral album, but I prefer this stripped-down version, which builds and builds 'til it bursts out into a joyous ululation-filled climax.

The version in this video is similar. Not quite as raucous as on the album. But it does feature a boat onstage, (at around 9:45 and forward) which is pretty awesome:

Side 2 of my tape is of sub-par audio quality, but Najat shines through nonetheless.

PS - I've been working on a Lemchaheb post, but got caught up in a forest of metaphors, from which I'm still trying to extricate myself. Soon, incha'Llah.