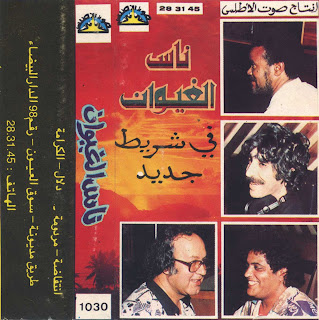 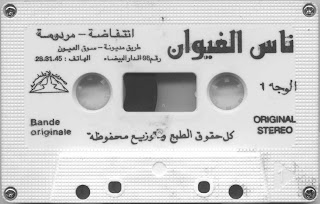 In honor of the pending vote at the UN regarding Palestinian statehood, here's a Nass el Ghiwane tape from around 1992 featuring the song "Intifada", commemorating the then current intifada. This was not the first time Nass el Ghiwane had sung about the situation in Palestine. Their more well-known song on the subject is "Majzara" (popularly known as "Sabra & Shatila") was released 10 years earlier, following the terrible massacres there.

It's unusual for NG to be so explicit when dealing with social and political issues. It's easier for them to do so when they are singing about situations outside of Morocco. When singing about issues within the kingdom, they danced a fine line, using metaphor and oblique references to let their audience know what they were talking about while avoiding running into trouble with the authorities.

This approach was certainly necessary during the reign of Hassan II. Nass el Ghiwane were past their prime of popularity by '92, but there were really no other outlets (to my knowledge) for music with social commentary in those days.  Hassan's successor Mohammed VI has made some progressive changes since ascending the throne in 1999, and some avenues for music addressing social themes seem to have opened up for Moroccan hip-hop and fusion artists. However, artists can only go so far in what they say for, like his father, the present king does not tolerate direct criticism of his policies from journalists or musicians. 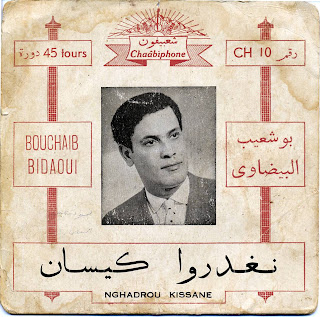 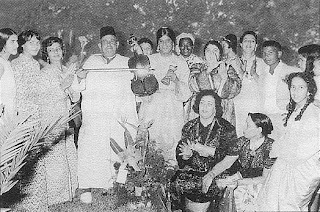 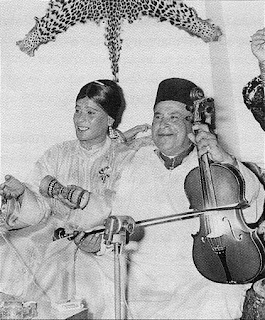 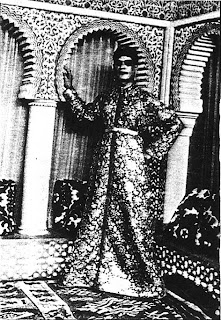 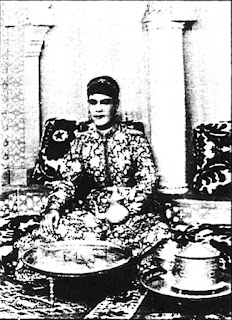 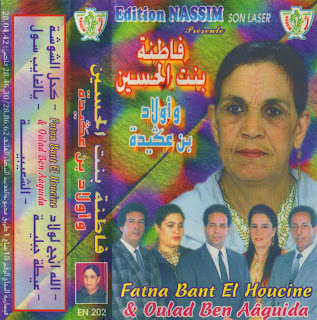 The shikhat. Morocco's singing and dancing bards (bard-esses?). Recognized as carriers of a deep folk poetic-musical tradition, but also derided as women of ill repute. Loved and despised.

The aita (lit., "the cry" or "the call"). Rural Arab Moroccan sung folk poetic tradition. One of the main sources for Moroccan mainstream popular (urban) chaabi music. Aita is to chaabi as rural white southern US folk music ("old-time") is to Nashville-produced country music. Ergo: this is the real deal!

The late Fatna Bent el Houcine. Probably the most well-known shikha within Morocco. As the out-of-print CD on Buda calls her, "La Grande Voix d'el Aita". From the coastal city of Safi, one of the hot-spots for this type of music.

For your enjoyment, 2 cassettes from the 1990s featuring Fatna Bent el Houcine with the instrumental ensemble that backed her for years, Ouled ben Aguida, and her group of shikhat, including Shikha Hafida (pictured withe the band on the cassette cover), who has continued to work with the band since Fatna's passing.

One thing I love about the aita is when the shihat take turns singing verses within a song - you get to hear each singer in succession. There's some nice footage of this here, including both Fatna and Hafida, as well as some dancing (the climactic part of 'aita performances) which you won't get on the audio cassette! 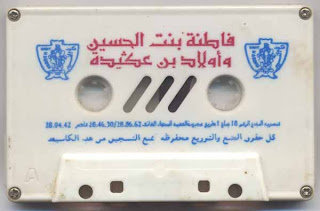 For those of you who love odd rhythmic cycles, dig the final track on EN203, "Aita Bidawiya (Kharboucha)", which begins in a 40-beat cycle then progresses to 19- and10-beat cycles before ending up in a final, ecstatic 6/8. Epic, dramatic, sublime, rocking, beautiful stuff.


BTW - I don't mean to diss Moroccan chaabi or Nashville country - both have their joys! I'll share some chaabi down the road a bit...