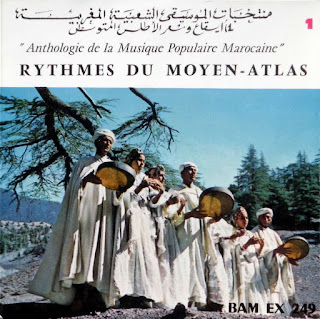 Here's a vintage stash of folk music field recordings made and released in the 1950s and 1960s by one Jean Mazel, a French cinéaste and ethnologue, about whom I can find little information online. Most of his published recordings (and a disambiguation with a namesake) can be found here, and a number of his publications are listed here. 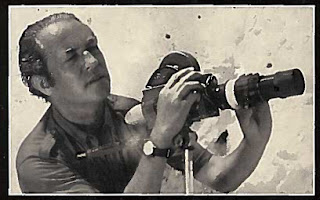 The recordings presented here were originally released on one 10-inch album (33 RPM) four 7-inch EPs (45 RPM). They have been resequenced and made available for streaming/download by the "UK-based one-man trancedental-drone band" Tuluum Shimmering:

In addition to being offered in their raw form, the Moroccan recordings have been incorporated into 3 CDs worth of Tuluun Shimmering's psychedelic recordings, also available from their Bandcamp page, or as CDs from their homepage.

The original 10-inch album features linking narration in French. If you're interested to hear it in its original state, check the YouTube clips below. (I'm happy to have the narration removed in Tuluum's version. It reminded me of the pretentious voiceovers I heard between acts at the Folklore festival in Marrakech in 1995.)


I went looking online for the original artwork/notes, and to see where the original tracks fit into Tuluum's sequence. If you're interested in that sort of thing, you can find the images I collected and my crosswalk spreadsheet here.

Thanks to tape aficiondo and old Berkeley pal @boxwalla for calling my attention to this.
Posted by tim abdellah at 2:03 PM 4 comments: