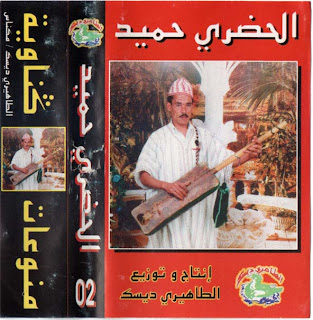 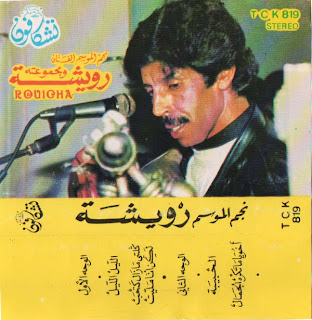 Very sad to report the passing of the great Mohammed Rouicha. Thanks for the great tunes and your warm spirit. This is my other favorite Rouicha tape. Has the classics "Lil el Lil" and "Lahbiba", and fills out the last 4 minutes of side 2 riding out the groove with a lotar jam.

Also worth a listen is a recent collaboration between Rouicha and the Moroccan rock band Hoba Hoba Spirit - just hitting the interwebs this week: 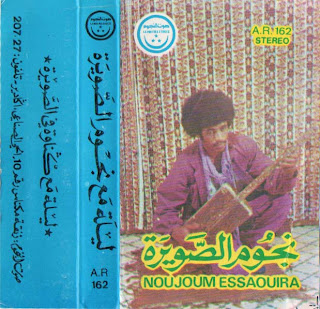 Well I'm pretty sure it's Maalem Omar Hayat here. One of the top Gnawi maalem-s of Essaouira. I haven't seen any other commercial recordings by him, though he is a perennial at the Gnawa Festival.

It's a small-group session - sounds like just 3 musicians. I can't figure out what percussion is being used here. It's definitely not qraqeb. Sounds a little like a hi-hat, but I think more likely it's someone using spoons on a tea tray, or some other such improvised utensils. Pretty mellow vibe.

The spine reads: Lila ma3 Noujoum Essaouira / Lila ma3 Gnaoua fi Essaouira (Night with the Stars of Essaouira / Night with Gnawa in Essaouira). This ostensibly refers to the Gnawa lila ceremony, though the songs are all over the place (in terms of what parts of the ceremony they are pulled from), and the vibe is nothing like a lila. Non-Gnawa (including festival promoters and cassette/CD companies) are pretty loose with the term lila. The several times I attended the festival in Essaouira, there were events billed as "lila-s" held away from the main stage. These were not lila ceremonies, but rather small concerts featuring Gnawa groups (without the ubiquitous jazz-fusions that occurred on the main stages).

Even with the misleading lila reference, the tape is pretty enjoyable - an interesting selection of songs, and strong playing from Maalem Omar. 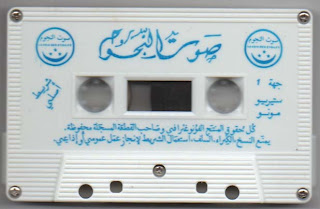 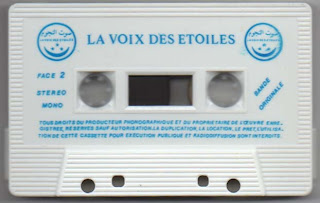 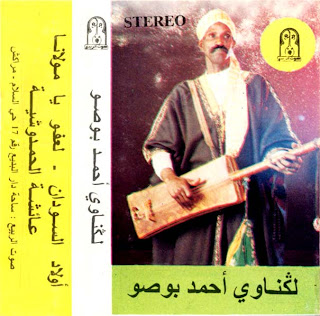 OK - enough with the Pokémon you say? Scraping the bottom of the stash? Au contraire! If chaabi Pokémon ain't your style, consider it an audio palate cleaning, a slice of picked ginger on your sushi platter, to get your ears ready for some full-on tagnawit sounds.

The late Hmida Boussou (of Casablanca, but with roots in Marrakech) was a serious, deep Gnawi maalem. His guinbri spoke volumes, and we're lucky to have some fantastic recordings of him in the Al Sur 5-disc Gnawa Leila series. He didn't record many commercial cassettes in Morocco. This is one of only a couple that I've seen. It appears to date from the 1980s, though it's hard to say for sure. I picked it up around '93, and it's a great one.

The guinbri is prominent in the mix but not distractingly so. One of my pet peeves with Gnawa recordings and electrified performances is that the guinbri is sometimes too far up front in the mix, destroying the dynamic tension between the sound of the guinbri and that of the incessant, clattering qraqeb. That being said, Maalem Hmida's playing is so subtle and consistent that it withstands being so "naked" in the mix. (This is also the case on disc 1 one of the Al Sur series.) 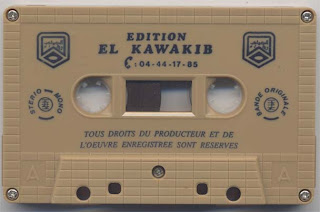 With a couple of exceptions (Sadie Fulani Hiriza and Wahyana Waye), nothing here duplicates anything Maalem Hmida plays in the Al Sur series.