Moroccan Tape Stash Live this week with Bodega Pop, Monrakplengthai, and Give The Drummer Some

I'll be chatting and sharing tunes live on the WFMU Drummer Stream's Bodega Pop Live Wednesday from 4-7PM Pacific for a celebration/discussion of the "audio-centric download weblog". Join me, host Gary Sullivan (Bodega Pop), Peter Doolan (Monrakplengthai) and Doug Schulkind (Give The Drummer Some, Mining the Audio Motherlode) for a 3 hour tour of the music blog ocean.

Stream and join the chat at wfmu.org.
Or tune in on TuneIn.
Posted by tim abdellah at 2:12 AM 3 comments: 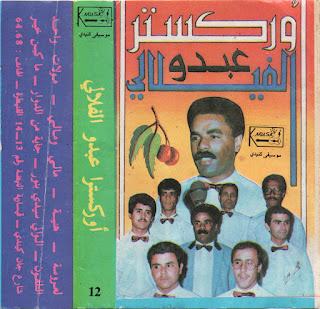 Aaaah... a Moroccan wedding on a hot urban summer night about 30 years ago. The smell of mint tea and the amplified, saturated sounds of a big jawq/orchestra animating the crowd. After a bit of slow stately music (melhun or Andalus), the bride is paraded in, in all her glory, the ululations fly, the crowd rises, and the band launches into Lâaroussa Jat:

I picked up this cassette on my first trip to Morocco in 1992. It's your typical wedding chaâbi fare, but with an nice punch to it - the drum kit is propulsive, the electric guitar nice and twangy, and the bass and strings also pack a punch (unlike the smooth timbres that would become the norm a few years later). And Abdou el Filali's singing is appealing, energetic, and enthusiastic.

Filali was born and raised in Kenitra. His early musical career was spent with Ghiwane-style groups Layali el Ounss and L'Mghariyine. He later attended the conservatory in Kenitra, where he found his voice as a chaâbi singer. If the info I found online is correct [1], it was Filali who popularized the song Laâroussa Jat, via the version on this cassette. The song subsequently became a wedding standard - that's a notable achievement for any singer! [I'm pretty sure it was played at my wedding - I wonder whether it's still in the repertoire for weddings today.]

Another rhythmic track from the album caught my ear. "Oh, they're singing in French", I thought... "Wait, did he just say 'passé composé'? Are they... conjugating verbs to a chaâbi beat?" Yep - here's what I got:

Filali remains active today. You can find some recent videos at his YouTube channel. There are some old cassette covers and photos on his Facebook page. And Soundcloud has a rip of the song Lâaroussa from a tape of better quality than my copy. This version also contains the opening ululations and Slaaaaaa ou Slaaaaaaams that are cut off on mine.

[1] There's not much info about Filali online. The info in this post is based on a scan of an old newspaper article and a biographical sketch accompanying a video clip on the excellent YouTube channel of Hasan Amahch. 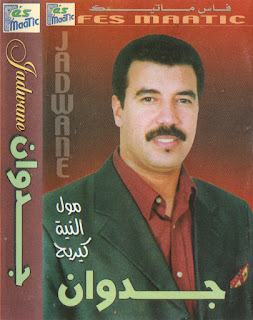 Here's a very nice album by Jadwane (usually spelled Jedwane, usually billed as Orchestre Jedwane). El Mokhtar Jedwane is a chaâbi singer and composer from Rabat. Quite popular in the 90s and 00s, Jedwane retired from chaâbi in 2008 after making the Hajj to Mecca. [1]

Jedwane's style of chaâbi is of a very different variety than that of Said Ould el Houate which I presented last week. No real âita influences here. This is a much smoother chaâbi, with some traces of Andalusian melodies (see track 2), and orchestral flourishes that would be at home in Middle Eastern pop music or Moroccan chanson moderne. This sort of chaâbi typically bores me pretty quickly, but I must say Jadwane does it well and thoughtfully, and he has a lovely and sweet voice.

An interesting track here is "Oufigh Idjes Inmaden". It opens with a northern Moroccan style of melody and rhythm. Jedwane announces the title of the song in Arabic, "Lqit Bent Ennas", which he dedicates to Riyafa wherever they are, inside or outside of Morocco. Rather than singing in Arabic over this Riffi beat, though, Jedwane switches over to a standard chaâbi melody and rhythm, but starts singing in Tamazight (I assume it's the Riffi/Tariffit dialect.)

It's an unusual approach - for an Arabaphone chaâbi singer to translate an original song into Tamazight and sing in that language. As a way of evoking or playing across the linguistic and cultural divide, it certainly takes a greater commitment and effort than simply playing a Sousiya song and singing in Arabic, as I described some time ago. Jedwane thought enough of the work to include the lyrics on the j-card in both Arabic (Darija) and Tamazight (Tarifit).

This was not the first time he undertook such a project. His online biographies mention that in 1998 he spent 8 months on a translation of his song "Bghini Nebghik" into Tachelhit. [2]

I know I was complaining last week about keyboard bass in chaâbi. This album is full of it, but it's used here unobtrusively, and quite nicely.

There's another album of Jedwane's over at Moroccan Tapes and lots more at Ournia.

[1] Interview with Jedwane at Hespress.
[2] Biography of Jedwane at Music Chaabi.
Posted by tim abdellah at 3:24 AM No comments: 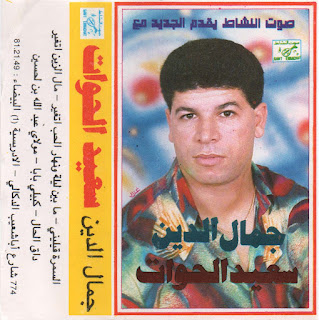 Here's a tape by a young Jamal Eddine Said Elhouate, known commonly these days as Said Ould El Houate. The singer and viola player was born in 1968 in Casablanca. His real name is Jamal Eddine Said, and he was nicknamed ould el houate (son of the fishmonger) because his father worked at the port [1]. He rose to fame in the 2000s and 2010s with a chaabi style rooted in aita.

This album dates from the mid 1990s, and it benefits from the simple production values of the time. This is the simple and satisfying combination of a scratchy viola, a couple of tightly strung bendirs, Said's lead vocal, and some shikhate singing response vocals. Most recordings you find of Said Ould El Houate date from the 2000s and later, when it becomes hard to find chaabi recordings without a keyboard bass. This older style is refreshing, sort of in the vein of Abdelaziz Stati. Like Stati, Said appears to be an aficionado of aita. He has spent time in Safi learning and reviving old songs from the Abda variety of aita [1].

I was surprised to see the song title "Koubaily Baba" on this cassette. The name is reminiscent of Gnawa songs "Koubaily Bala" and "Koubaily Mama". Said's song does not sound like either of those songs, but the lyrics explicitly reference possession, Gnawa and Baba Mimoun. The music evokes Jilala trance music, with the bendirs playing a very syncopated pattern where drum strokes rarely coincide with the beat. So this track is a chaâbi evocation of a Jilala approach to Gnawa spirits.

Said Ould El Houate remains active and popular today. You can stream many of his albums at Ournia and a few on Spotify. And you can find lots of content on his Youtube channel.