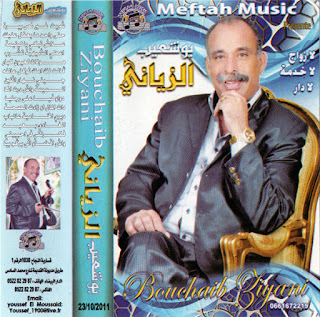 No Marriage, No Work, No Home.  That's the album title listed on this cassette from Bouchaib Ziyani, singing violist from Casablanca working in the chaâbi - âita continuum. This is some well-produced chaâbi with an insistent but not mechanical percussive drive. Bouchaib's scratchy viola blends nicely with the various synth zither, lute, flute or banjo settings. 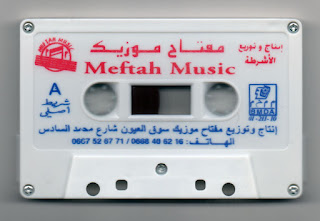 These songs are soaked in beer, tobacco, and regret, and Ziyani's singing sounds like he's been there (or is still there). "She drank only half a beer, and started a battle between us" (Track 1). "Give the blonde a drink" (Track 2). "I drank the first beer, I drank the second one. The third one reminded me of my beloved" (Track 5). "Mama, what did I do? I sought my fortune, but in my life achieved nothing. No marriage did I marry, and no work did I find. The evil eye is upon me, but I don't who cast it." (Track 3). The songs mainly stay to the chaâbi end of the continuum, but the long Track 2 moves into âita territory with some nice interplay with a female vocalist and stretches into some extended versifying and riffing, ending up in saken/trance territory.

Ournia.com relates that Mr. Ziyani is from Casablanca but made his career in Oujda. Ournia's biography also states that the currently active Bouchaib Ziyani recorded with Khaddouj Zroukia, which would make him the same artist as featured on these 45s in Settatbladi's collection:


However, the 45 pictured above is credited to "The Late Bouchaib Ziani". And although his hair is greying, the artist on our cassette does not appear to be quite old enough to have recorded those 45s. At any rate, enjoy!

Get it all here.
Yala has more Ziyani here.

PS, yes I know I'm a complete hypocrite calling these "honky tonk" songs, when a few weeks ago I was ranting about the use of Anglo-American popular music analogies to describe Moroccan artists.
Posted by tim abdellah at 6:25 PM 2 comments: