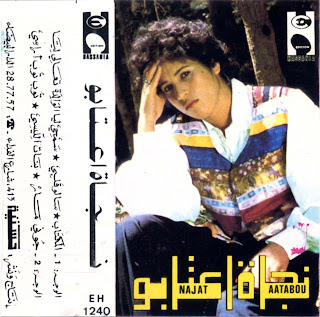 One of the most individual female voices in Moroccan music, both sonically and artistically. Even when complaining about typical women's problems (sneaky men, jealous women, family estrangement..) from an underdog position, the strength of her voice makes her seem to be the one in charge of the situation.

Snippets of her biography can be found around the web, e.g. here, here and here. Before starting her professional career, she would sing informally at parties in her hometown of Khemmiset. Bootleg tapes of her performances began to appear in local tape shops, and her unapproving family eventually found out she'd been singing. To escape their wrath, she fled to Casablanca, where she began her career in earnest.

Najat Aatabou made an immediate impression on the Moroccan scene in the early '80s with a sound and songwriting style that hadn't been heard before. Like Roucha, crossover success by singing Middle Atlas Berber izlan-styled songs in Arabic (rather than Tamazight - though she occasionally records in her native Tamazight too). Her early recordings used a fairly traditional musical texture (though with the Arab oud rather than the typical Berber lotar). But the songs were anything but traditional. Women singing from a woman's perspective was nothing new - but Najat Aatabou's clever wordplay was something new, and she approached the issues not from the ambiguous, seductive position of the shikha, but as a modern soul sister, singing out to her contemporaries.

She remains popular today, though mainly among oldsters from my era. I think the last big hit she had was the great "Mali Ana Ma 3andi Zhar" in around '96. Over the years, she's achieved some international attention with CD releases on Globestyle and Rounder (both out of print). On the latter you can hear "Hadi Kedba Bayna" - the hit of the summer of '92, at least among the folks I was hanging with in Marrakech. This song was later sampled by the Chemical Brothers for "Galvanize".

Najat Aatabou has always maintained strong creative control of image, career. Instrumentation has changed over the years, but tends to be best when she sticks to a simple format where her vocals can shine with a basic Moroccan rhythmic and melodic accompaniment, which she uses most of the time.
(Though her orchestral tape from the late '80s is pretty awesome - I may post that at some point.)

This tape is, I believe, her first album, featuring the hit "J'en ai marre" (I'm sick of it). It's a shame most of her work is unavailable. Hope you enjoy this - I've got plenty more!

Charli Elmaghribi and other goodies at the Jewish Morocco blog 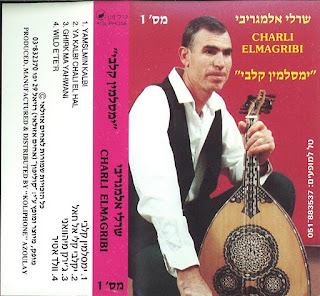 Chris over at the Jewish Morocco blog recently uploaded a couple nice tracks from this cassette here. There are some other audio goodies in his stash - mainly vinyl - from Morocco (Koutoubiaphone) and Israel (Koliphone), as well as great info about some overlooked artists. Check it out!