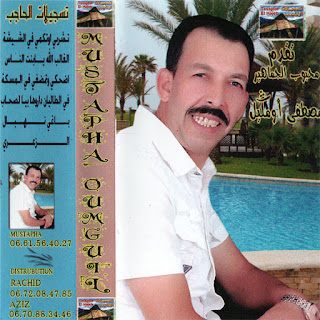 Paris, Beirut, Syria, Iraq, et al. Wishing relief to those mourning, scared, suffering. Music blogging may not count for much in the big picture, but if it brings some smiles and spreads a little cross-cultural grooving, it's a positive activity.

Here's a pair of albums from violist Mustapha Oumguil. A prolific artist, Oumguil has recorded extensively, singing in both Moroccan Arabic (darija) and Central Atlas Tamazight. He hails from El Hajeb (between Meknes and Azrou), as reflected in the name of his cassette label, Tasjilat el Hajeb (El Hajeb Recordings).

This is music for shimmying and shaking in a Middle Atlas sort of way. Check the dancing ladies in the concert footage below - hips don't lie, and Oumghil keeps 'em gyrating all night long. Thousands of Moroccans agree, as evidenced by his appearance at the huge Mawazine festival in Rabat this year:

This is 21st century chaâbi, keyboard-heavy and auto-tuned, but with enough local flavor to keep it countrified. This can be heard in melodies themselves, especially those of the Tamazight language songs. The always-prominent bendir frame drums also keep that Middle Atlas feel prominent.

The Tamazight album comes from a CD that passed through my house earlier this week. It had no artwork, only the name of Oumguil and the title "Tarbat Ighoudan" (a song that is featured in the concert video above).  The Arabic tape is one that I picked up in Beni Mellal in 2012. If you want more Oumguil, there are loads of other Arabic albums at Yala and Amazigh albums at IzlanZik. There's even a $2 album over at Amazon! And check out this this post from last year featuring Abdelâziz Ahouzar, an artist working in a vein similar to Oumguil. More of that good âita zaêriya from Shikh el Moutchou. Check here for an earlier post with some info about him (courtesy of Hammer's comments) and about the âita genre (courtesy of Ahmed Aydoun's book). And check below for a sample. Grab the whole thing to hear the bitchin' 9/8 opening track. It's on Production Hicham al Atlas, so you know it's rocks!

Get it here.
Posted by tim abdellah at 5:41 PM No comments: