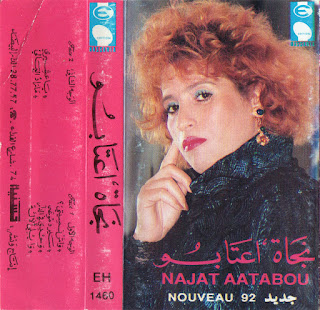 New sound: We've shared several of Najat Aâtabou's early, oud- and bendir-driven albums here at Moroccan Tape Stash. (See here.) That stripped-down sound launched her to stardom in Morocco in the 1980's. (The one exception to this formula, in her early years, was a fascinating orchestral album in the chanson moderne style.) With "Nouveau 92", Najat went in a different sonic direction: the viola leads the melodic accompaniment and a funky synthesizer bass underpins a synth string section, while the rhythm section is driven by a darbuka and what sounds like a hi-hat. (If a full drum set is present, it's being played very lightly.) It's an unusual sound - not your typical viola-driven chaâbi texture. Top it off with Najat's fierce vocals, and you have something nouveau!

Huge hit: "Hadi Kedba Bayna" was an instant classic! The refrain features the repeated line "Hai Hai Hai", which is both a great singalong and an interjection expressing disbelief or annoyance, something like "whoa" or "oi" in English. And the verses were basically rhyming couplets, calling out her man for cheating on her and then lying about it. It's the type of song that can easily be incorporated into any group's repertoire and to which other singers can add new, amusing, and thematically appropriate lyrics.

In 2006, I had returned from a summer in Morocco and was watching a ball game on American TV, when during a Budweiser commercial I heard the violin riff from "Kedba Bayna" over a techno beat. Fearing I was having hallucinations, I incredulously emailed some folks and found that "Kedba Bayna" had been sampled in the song "Galvanize", released the previous year by the Chemical Brothers, featuring Q-Tip! That, at least, is still in print! (And you can find the commercial on YouTube.)

Reissue notes, for the discographically inclined: Here at Moroccan Tape Stash, I usually give you the running order of tracks exactly as they appear on the tapes. Sometimes this running order differs from what is printed on the j-card. I usually prefer to be faithful to the way the tapes were heard in thousands of Moroccan cassette players rather than the way one person transcribed the song titles when the j-card was going to print. For this album, though, I am going to go with the j-card running order. The copy I'm sharing here is not my original 1992 copy of the cassette - that one is long gone - but rather one I obtained several years later (probably in the late 1990s). I have a strong memory of this album beginning with "Wash Nsiti?", and of "Wahdi Feddar (Kedba Bayna)" being buried somewhere in the middle of the side, as is listed on the j-card. On this cassette, however, "Kedba Bayna" leads off side A.

I'm guessing that once "Kedba Bayna" became a big hit, the song order was switched so that it would appear at the beginning of the cassette, where it could be more easily found. In those days, if you went shopping for cassettes and wanted a particular song, the tape seller would pop the cassette into a deck and play it, so you knew you were getting the correct tape. That's much easier to do when the song isn't somewhere in the middle of the tape.

So... I've resequenced the running order to match what is on the j-card, because that is closer to my memory of my original 1992 copy than running order of the copy I digitized here. (And also I like it better.) For the record, the running order on this late 90's copy is: A1-Wahdi Feddar, A2 Sir Dmou3i, A3 Wayli A Lalla, A4 Ya 3achiri, B1-Wach Nsiti?, B2-Parle je t'ecoute, B3-Marad al 3ali. 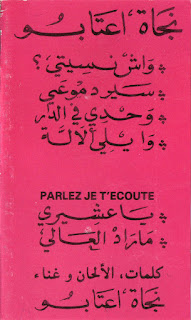