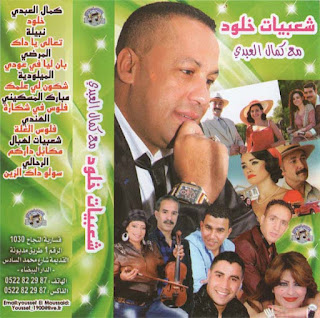 Here's a chaâbi compliation tape I picked up in Beni Mellal. The title is "Shaâbiyat Khouloud with Kamal el Abdi". I recognized El Abdi, the dapper musician whose photo is the largest on the j-card. I also recognized Nabila (bottom right) and El Miloudia (bottom left). But the big question was - who is the great looking couple in the straw hats?! Is this a stylish new pop-rai duo?

On second look (and after listening to the tape's title track), I recognized them - the stars of the smash soap opera "Matensanich" (Don't Forget Me), which is commonly known by the name of the lead female character, "Khouloud". The series, broadcast this year on 2M, is a dubbing into Moroccan Arabic of the Turkish series "Hanımın Çiftliği".

My wife watches the show, and I've seen a couple of episodes. The show looks pretty compelling (if you like the melodrama of soaps).  I made a point to avoid watching it - I didn't want to get sucked into it like a couple years ago  when I started watching "Ayna Abi", the fab Moroccan Arabic dubbed version of the American telenovela "Amarte Asi". (Everybody Loves Frijolito!)

"Khouloud" was very popular in Morocco this year. Here's a Moroccan pop-rai tune referencing characters from the show:


In the chaâbi-TV crossover songs that I can recall (like here), the lyrics are less about the plots of the shows and more about the obsessions people have with the show. That's the case in both Cheb Hindi's song in the YouTube clip above and, i think, in the title track of today's featured cassette.


As for the rest of the cassette, it's a pleasant collection of current Moroccan chaabi stylings: some country-chaâbi from Kamal el Abdi, some pop-rai from Cheb Hindi (though I wonder why the tape doesn't include his "Khouloud" song), some peppy pop from Nabila (the queen of chaâbi auto-tune), and a smattering of other chaâbi tracks. The kicking-est track, IMHO, is the unlisted Track 9, an uptempo, percussion-heavy, viola-driven, auto-tuned rave-up riff-fest. 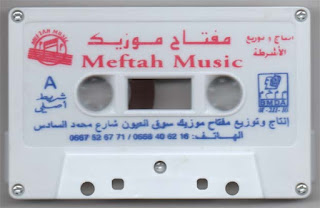 Mastering note - as usual, I recorded this tape to my computer with Logic Express, where I divided it into discrete tracks. I typically don't process the sound much thereafter, other than a little compression to smooth out the peaks and let me raise the volume a little. This time, I thought I'd use Logic's built in mastering tool, in particular the Hi-Fi setting. Gives the final product a more shiny sound. Hope it sounds alright!
Posted by tim abdellah at 2:06 PM 2 comments: 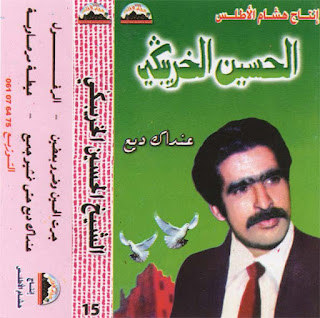 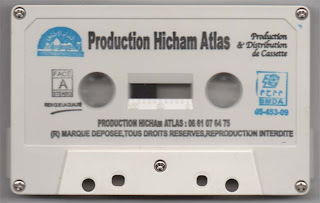 If I was lukewarm about the viola in my last post, I'm happy to post here some fabulous, scratchy viola from Shikh El Houcine el Khouribgui. Some good, old fashioned aita for ya, Khouriba-style. Another offering from the swell Hicham Atlas imprint. 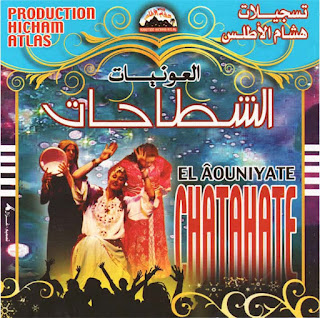 This CD sort of does double duty - you've got some lady-driven call-response singalong tunes (which would probably sound just fine without the viola that plays along through the whole thing). And you've got some viola-driven chaabi tunes and riffs that give that desired wedding/party ambiance - in particular, track 6 which feature what sounds like someone doing rhythmic-percussive footsteps on a qaâda (the metal basin that dancers climb onto during weddings or performances, to let their feet sing).

Here's a pretty rocking qaâda clip (which spins off into silliness about halfway thru...)

But back to the CD. Personally, I prefer my call-response women's songs with percussion-only. But I understand the irresistable pull of the viola - the chaâbi ambiance-animator supreme, and it works alright here. What surprised me and worried me on my recent trip to Morocco, is that when hunting for tapes of the great âbidat errma genre in and around Beni Mellal, I was told by all tape sellers that nobody was recording it anymore with its traditional percussion-only ensemble - the only recordings I could find featured violas in the group. Stupid me, I was so disappointed that I didn't pick up any tapes of that. It would have been interesting (he says, donning his ethnomusicological hat) to compare older tapes of the genre with what's calling itself âbidat errma today. On my previous trip in 2006, the trad stuff had become quite popular, and there were loads of young men playing playing in âbidat errma groups in the Beni Mellal area. I've got some vintage âbidat errma I'll drop on ya one of these days. You've never heard a pair of scissors played so funky!!

By the way this CD and many tapes I got on this trip come from the production house Hicham Atlas. Their product lists no address - only a cell phone number. I'm guessing they're located around the greater Beni Mellal-Tadla-Khouribga-Fkih ben Salah area. Good stuff! 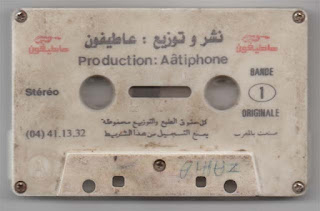 Greetings everyone, and thanks for the comments and greetings during Ramadan! I hope to catch up on correspondence soon.

Morocco was HOT HOT HOT during my entire trip. I did a bit of cassette shopping, mainly around Beni Mellal, but not much in Marrakech, where I spent only a couple of days. I managed to pick up one tape there - at a second hand shop near Sidi Abdelaziz - I saw the Aâtiphone logo peeking out of a pile of tapes with no labels or jewel boxes. Everything I have on Aâtiphone is gold, so I grabbed it. Didn't have the stamina to continue poking through the pile in 120 degree heat in the middle of the day, fasting...

Indeed, it's a good tape - 40 minutes of raucous call-response, full-throated Houariyat songs (all in 6/8 - none of the loopy quintuple stuff). Zahia's name is written on the tape, and she certainly put some mileage on this tape - there are some dropouts here and there. Patina...

I'll drop some more ladies' percussion grooves soon - an interesting CD I picked up, which I'm still trying to decode.

Hope you've all been well - it's nice to be back!