Moulay Ahmed el Hassani - Accept No Substitute, Unless He Too Rocks 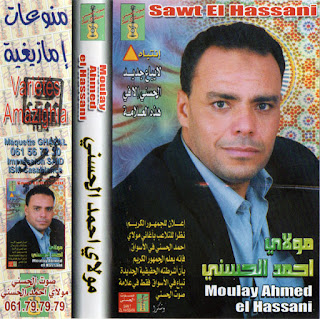 Here's some more of that Moulay Ahmed Elhassani for ya. Track 4 of this album was featured on the Moroccan Tape Stash episode of Bodega Pop Live a couple weeks back. If you didn't get a chance to listen then, you can still hear the program in the archives here. We had a rollicking good time, spinning 3 hours of choice cuts from this blog and beyond. Many thanks to Gary for coming up with the idea and making it happen!

The j-card of this tape reads "Variétés Amazighia" suggesting that it contains a collection of songs sung in Berber. However, on the left side you can see a black stamp that reads "Zman Tghayer", which is the opening track of the album. The songs are all sung in Arabic, driven by more of that slow-jammy flanged-out slinky guitar you know and love.

There is a long paragraph of text on the front of the j-card, enjoining the public to purchase the artist's official tapes only in stores and on the imprint "Sawt El Hassani". I'm guessing there was some specific issue with tape piracy that prompted this message. One hopes that his albums sold on Amazon are properly licensed.

Or, I wonder if there was some issue with this guy: 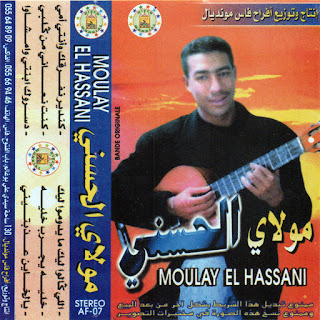 This cassette is attributed to a Moulay El Hassani, who happens to play the same sort of modified guitar as Moulay Ahmed El Hassani, and in the same style. Is this a shameless attempt at cashing in on the success of an older, established artist by adopting a name so similar that it's basically designed to confuse the consumer? The term "Moulay" is an honorific, translating roughly as "My Lord". So to me, this looks a bit questionable - as if some Hofner-bass playing musician not named "Sir Paul McCartney" decided to release an album of Beatlesque pop as "Sir McCartney". Then again, Moulay could actually be his name, so this could be totally legit.

Well, the proof is in the pudding, right? And this is a pretty groovy tape in its own right. Yes, Moulay's tracks have the same sort of flangey guitar, programmed Middle Atlas rhythms, and male-female antiphonal vocals as found on Moulay Ahmed's recordings. But Moulay's riffing has its own feel, it seems like he stretches out a little more in his instrumental breaks than does his namesake.