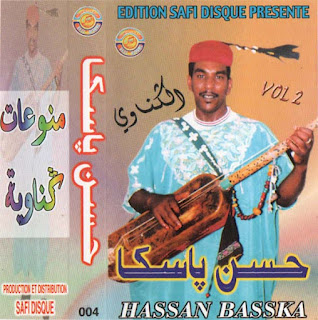 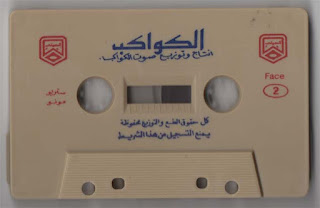 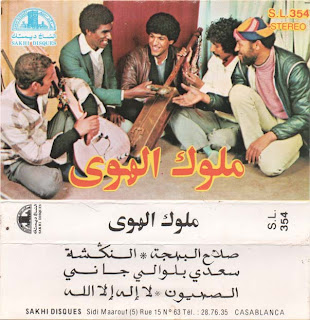 
Dig it! GnawaMaVie's channel on YouTube has some great Gnawa audio (including some things I've posted on this blog). One fantastic series of clips presents 3 hours worth of audio from a Gnawa lila. The notes say it features Maalem Mustapha Baqbou and Maalem Abbas Baska. I put the 25 clips into a playlist so you'll can listen to them in the correct order. It's not an entire lila (it's missing the entire Buhala, Kohl, Ghabawyin and 3ayalat, as well as pieces of the other suites listed below), but I'm not complaining!

For me, this sort of Gnawa tape blows doors on any studio recording - this is Gnawa music at its organic best - when the music ebbs and flows, expands and contracts in accordance with the vibe in the room, the particular mix of people in attendance, and the needs of trancers.

Entire playlist is embedded above. Individual links are below. Many thanks to GnawaMaVie for sharing these recordings! 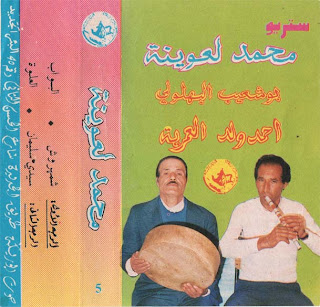 Here's one of my fave cassettes - a particularly fierce Jilala tape for ya. Picked this up in the mid-'90s, I think in Marrakech or thereabouts. The tape is from Bir Jdid (which I had to look up on Google) - it's between Casablanca and El Jadida.

The tape doesn't say "Jilala" anywhere on it, but the tunes have that same throb and rasp that identify the Jilala groove. In addition to the gasba flutes and bendir frame drums, you'll hear some qarqaba metal clappers on the tunes labeled "Buwwab". These songs invoke some of the spirits associated with the Gnawa, who are the main users of the qarqaba.

In addition to the trance material (Sidi Slimane, Sidi Chamharouch, Buwwab), the tape also contains "Al-3aloua", a piece usually associated with aita / shikhat. The recording of this song (as well as track 6, another song that seems to be non-Jilala) features only a single gasba, rather than 2. The use of 2 gasba-s adds a loopy dimension to the sound and seems appropriate to the trance material. Whatever the aesthetics of trance textures vs. non-trance textures may be, it is certainly true that most musicians working with trance repertoires also perform other non-trance genres, and that seems to be the case with this ensemble. 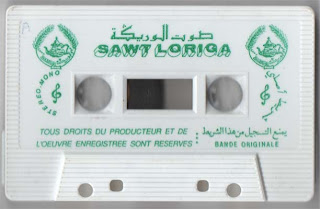 1) Intro
2) Chamharouche (? i guess. I can't hear the name in the lyrics, but it is written on the j-card, but then again, the tracks are all out of order too...
3) Sidi Slimane 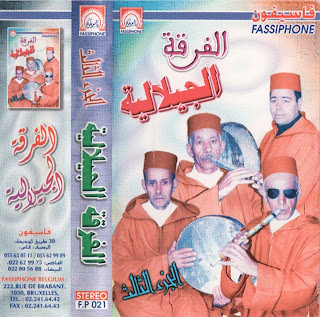 Finishing up my recent set of trance brotherhood music tapes. There are 4 well-known trance-music "brotherhoods" in Morocco - Gnawa, Aissawa, Hamadsha, and Jilala. I'm not sure exactly how widespread the Jilala are. I know they are found in the north, are quite popular around Casablanca, and can be found at least as far south as Marrakesh.

Jilala music is all about throb and rasp. Throb - the acceleration and decceleration within a song, the breathy organic timbre of the gasba flutes, the in-and-out-of-phase frequencies of the paired flutes. Rasp - flutes, voices, bendirs, all buzzy. This is music with a VIBE. The bendir patterns inhabit the 2/4 and 6/8 universes common across Morocco, but I find the drum stroke patterns particularly loopy and provocative.

I don't know where this group hails from. The j-card reads Al-farqa al-jilaliya, al-juz ath-thalith (The Jilaliya Group, vol. 3). I believe I got the tape in Casablanca around '01, but the tape company is based in Fez. Song titles are best guesses. Enjoy.