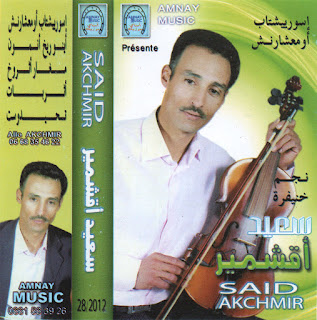 Here's another viola driven Middle Atlas Amazigh album for ya. Said Akchmir is a viola player and singer, I believe from Khenifra. I don't know who is the female singer on this tape, but her opening autotuned solo vocal passage blew my socks off. I also love the syncopated pattern the bendir is holding down.

As with Ouaboud Mohamed, whose tape was featured here last week, Said Akchmir appears to use studio synth instruments in his albums, but not in live performances. Here is a video clip of him, doing the live thing with the typical ensemble of several bendirs and male singers, one viola, and a female singer (plus a quartet of dancing ladies):

Izlanzik has a few of Said Akchmir's albums: https://www.izlanzik.org/sgr/said-akchmir_178.htm. And it looks like he created a YouTube channel this past summer: https://www.youtube.com/channel/UCzTxbWTAQGkfAOZBRyWCebA/videos

Posted by tim abdellah at 6:31 PM No comments:

Ouaboud Mohamed - Have Bendir, Will Sing, Syncopate, and Support Ouaboud Mohamed is a singer and bendir player from the region of Khenifra. Most recordings of Middle Atlas Amazigh music seem to be published under the name of the viola or lotar player (who is often the male lead singer) or that of the lead female singer. The singing male bendir player is typically anonymous in these recordings, being more of a support role than a star role. I love that Ouaboud plays this support role but also can be the lead singer and release his own recordings.  (Full disclosure: I am a singing bendir player who likes the spotlight once in a while but also loves to play a support role in an ensemble. Maybe it comes from also being a bass player.)

I picked up this tape in Beni Mellal in 2012. I couldn't find info online about Ouaboud, but he does maintain a Facebook page and a YouTube channel. He appears to remain quite active performing at private events (weddings and other parties, and private music salons) in the Khenifra area in formations with various viola players like Moha Amzyan and Mustapha Sghir, and female singers such as Fatima Talgadit and Naima Kouda. The ensembles typically consist of several bendirs, one violist, and one or more female singers. In the clip below, Ouaboud is playing the white high-pitched bendir, and he throws in some great syncopated accents in the 2nd half of the clip.

In addition to live performances, Ouaboud has made several studio recordings under his name, but I don't find any of them on the typical streaming platforms like Ournia or even on Izlanzik, which specializes in Middle Atlas Amazigh music. There a number of clips, however, on YouTube. Unlike in live performances like the one above, most of the studio recordings take place with an ensemble augmented by other instruments including, you guessed it, a keyboard bass.

On this tape, the studio has "chaâbified" the songs not only by using additional instruments, but also by adding instrumental "refrains" to the arrangements. The first 4 tracks of this tape each begin with a short instrumental section that features a melody played by synth strings and synth banjo (track 1) or flute (tracks 2-4). This melody is, in each case, unrelated to the sung melody of the song (other than being in the same melodic mode). Once the melody is played once or twice, the synth strings drop out and the live, scratchy Amazigh viola enters, playing the actual sung melody. After a couple iterations of this melody, Ouaboud enters, singing, followed by the female lead after a couple of verses. After a few back-and-forth verses between the two singers, the synth strings and banjo or flute return, playing the instrumental refrain from the opening of the song:

Even with these chaâbi tropes, the album still highlights the timbres of the scratchy viola and the buzzy bendir. In contrast to the first 4 tracks, the album closes with a short track that recalls the excitement of the live setting by losing the synth strings, ramping up the tempo, and letting the bendir come to the front of the mix in all of its syncopated glory! (Stream Track 5 below.) 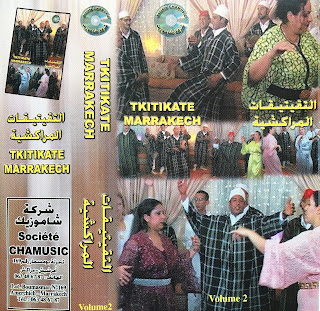 I tell ya, some of the best fun I've had in Morocco has been at parties in Marrakech where a tkitikat group comes to play. I'm surprised I'm 10 years into this blog and I've never really written about tkitikat. Well, I guess it's 'cos I didn't have any straight up tkitikat tapes (other than possibly the great Pokémon tape). Now, thanks to Mr. Tear (late of the esteemed Snap, Crackle & Pop blog, and currently hive master at Hive Mind Records), I've got a reason to write about it, 'cos he sent along this fine tape rip!

Tkitikat is a style of music played by men's percussion and singing groups. (It was always played by men, in my experience, but I haven't been to Morocco for a while, and perhaps there are female tkitikat groups now.) The primary venue for this music is at parties.

Repertoire - like a good wedding band (another type of party band), a good tkitikat group has dozens of songs in its repertoire that originate in various styles and historical periods. To end up in the tkitikat repertoire, though, they ought to share a few key elements:

Ensemble - the group will have a variety of drums. The group here is using a tar (tambourine), a darbuka, and some tâarijas. As opposed to female percussion and singing groups like âouniyat or houariyat who perform seated, the tkitikat groups play while standing, sometimes facing each other in a circle, sometimes broken out and moving around the room interacting with partygoers. And unlike a wedding orchestra, which typically features one primary lead singer, the tkitikate group tends to feature any or all members of the group as lead singers.

PLEASE STAND BY FOR A COUPLE OF FREE-FLOATING MUSICOLOGICAL MUSINGS:

Gender and percussion groups: I wonder why the female percussion groups like âouniyat or houariyat typically perform while seated, whereas the men's groups like tkitikat and âbidat errma perform standing 🤔 ... Perhaps it's because the male groups are the sorts of groups that one might also encounter in an outdoor halqa performing circle, whereas the female groups are more exclusive to indoor private parties.

Etymology and regionality: I wonder whether tkitikat is something that originated in Northern Morocco. The word is a diminutive of taktouka, which in Morocco refers most famously to the taqtouqa jbaliya - the taqtouqa of the Jbala region of northern Morocco. (We shared a tape of that a while back.) When I was living in Marrakech, a friend who played in a tkitikat group was excited when his group was able to learn some songs and rhythms particular to the North, so there is certainly a Northern tradition. In fact, I remember the groups in Marrakech going less often under the name tkitikat and more often under the name dqiqiya. The latter is a diminutive of daqqa, which is a musical form specific to Marrakech and Taroudant 🤔 ...

AND NOW BACK TO OUR REGULARLY SCHEDULED BLOG POST

To my mind, tkitikat groups seem like an active repository of Moroccan musical memory. Or like a jukebox - so many songs to choose from, and designed so that everyone in the crowd should find an old or new favorite song to please them and entice them to dance and be merry. The current tape is no exception. Track 1 has a Gnawa sound to it. Track 2 is an old Houcine Slaoui song from the 1940s. Track 3 is a version of Khiffat Rjel (better known as Ach Dani), Ismail Ahmed's classic 1960s hit, sung here with the words transformed from a song of unrequited love to a comic song about different kinds of food, and track 6 is a straight up version of the Jbala standard Ain Zora. Ranging wide across the regional and temporal map!

Well, while I was searching for some nice tkitikat video to share, I actually found a clip from this very album! 👆 It looks like the cassette is the soundtrack to a VCD, which dates this to probably the mid-2000s to early 2010s. And it turns out that on the first track, the lead vocal is taken by none other than the well-known Gnawi Mâalem Abdelkbir 'Lechheb' Merchane! I understand that many years ago, he was a member of Hamid Zahir's group. And Hamid Zahir's music is basically tkitikat with an oud added, so this is some old familiar musical territory for him! Abdelkbir is one of 3 lead singers on this album. He sings track1, the last bit of track 3, and tracks 4 and 7. A comic-oriented singer is featured on track 2 and most of 3, and a third singer is featured on track 6. Track titles listed here are my best guesses. 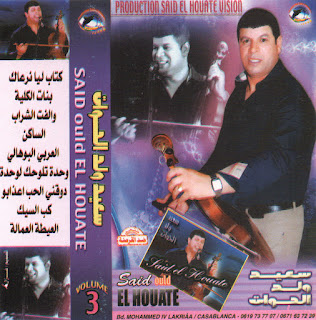 If you read my blogposts, you know I'm not always a fan of the keyboard bass that became prevalent in the mid 1990s in Moroccan chaâbi music. Full disclosure - I am a bass player, so my personal preference is for the sound of the bass guitar, operated by a specialist in that instrument, rather than the sound of a keyboard bass, operated by the left pinky finger of a keyboard player who is concentrating on various chord pads and synthetic voice timbres.

That being said, a good keyboardist knows how to excel in all areas, and I often set myself up to eat my own words, so here's a really great chaâbi tape from Said Ould El Houate that uses the trappings of early 21st century chaâbi production to good effect. Yes, it has keyboard bass, but it's in the pocket, funky, and not monotonous. Yes, it has autotuned vocals, but the female backup vocals sound awesome that way. Yes, it has applause from a fake audience connecting each track to the next, but it actually makes for nice segues. Above all, the musical textures remain rich, between Said's grainy vocals and scratchy viola, and the occasional percussive oud or qarqaba to kick the energy up to the next level.

We featured an early, fully acoustic tape of Said Ould El Houate a few weeks ago, but he really made his name with recordings that sound like this one. Enjoy! 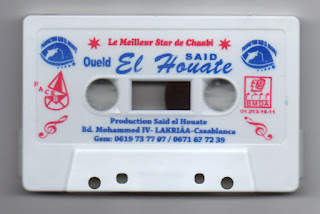