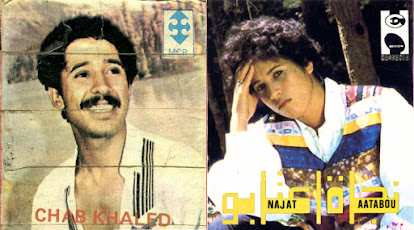 Over the last couple weeks, the K7MATIC blog has presented several tapes of the incomparable raï singer Cheb Khaled from the 1980s. I've been enjoying in particular the tapes from 1983-84. These albums are fascinating - existing on the cusp between the old full-orchestra style (with violins, accordion, electric guitar, etc.) and the newer electronic style that would come to prominence in the mid-late 1980s.

I was delighted to hear the oud on a couple tracks from the album Salou Ala Nabi, which blogmaster Reda dates to 1984.

As the album's final track progressed from a long oud solo into a mawwal and then into the song itself, I giggled gleefully as I recognized the song as "Samhi Liya Lwalida", which appears on Najat Aatabou's first album on Edition Hassania (which I believe dates to 1983 or 1984).

I'm pretty sure all the songs on Najat's album are of her own composition, so this appears to be Cheb Khaled covering Najat Aatabou. Far out!! (If somebody has different information about the song, please share it as a comment below.)

And of course you can still find my post/share of the Najat album HERE. Wow, this blog celebrates its 10th anniversary this coming spring!