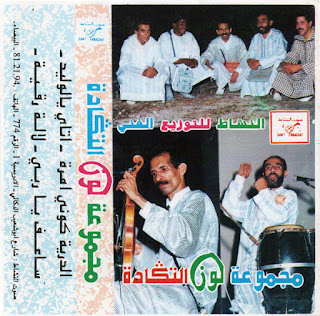 The group Tagada arose in the 1970s alongside other Arabophone "folk revival" groups like Nass el Ghiwane, Jil Jilala, and Lemchaheb. When I first heard Tagada in the 1990s, they struck me as a bit apart from those groups. Where NG and JJ riffed on traditional songs and genres to create new and memorable original songs and styles, Tagada's repertoire sounded to me like straight-up folk material, delivered in a manner faithful to some kind of earlier, more rustic aesthetic.

Tagada's folk sources come primarily from the âita repertoire. Here's some early Tagada from the '70s. With the banjo (which they later abandoned), this recording has a very Ghiwani vibe, similar to Nass el Ghiwane's aita-based classic L-Hassada:

I haven't found much of this early Tagada available online. I would LOOOOVE to hear what THIS version of the group sounds like: 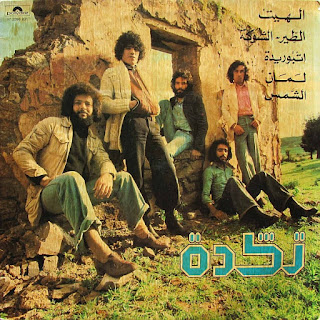 Oh joy, I found some - here's an amazing vintage 9 minute video clip, with electric guitar, even!

According to group member Dekhouche Ahmed Roudani, Tagada, like Nass el Ghiwane, came out of the theatre troupe of Tayeb Saddiki. Troupe members Omar Sayed, Boujemâa H'gour, and Larbi Batma split from Saddiki's group after the production of the play "Al Harraz" to form Nass el Ghiwane, while the future Tagada members remained with Saddiki's group for the next production, "Maqamat Badii Ezzaman al Hamadani" (1971).

In the Tagada I remember from the early 90s, the viola had eclipsed the banjo/guitar as the primary melodic instrument in the ensemble. This amounted basically to a stripped-down folk-chaâbi sound: viola and percussion (sometimes with a plucked banjo or oud) with âita-derived call/response and group singing, without the modern sheen of keyboards or guitars and without the sexy seduction of female shikhat singers.

Tagada usually performs dressed in jellaba robes. This is similar to what would be worn by traditional male folk or popular percussion ensembles like âbidat errma or tkitiqat groups, and in contrast to both the 70s folk revival look (either with groovy vests or the outlaw cowboy look of the album cover above) and the well-dressed-chaâbi-orchestra-lead-singer-with-a-suit-and-tie look. Despite their use of traditional dress and musical sources, one non-traditional practice does stand out - Mohamed Louz's unusual drum configurations: neither the double pair of tamtams (in the "Yahli" clip above) nor the conga/bongo combination (in the "Rgibaoua" clip) are traditional for Moroccan folk music - these appear to be Louz's own idiosyncratic configurations. 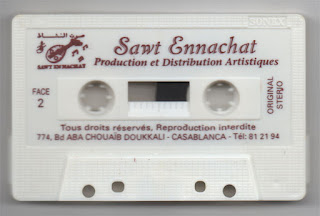 The only Tagada-related tape in my collection dates to 1995. I always thought it was by the regular Tagada group, but now that I'm taking a closer look at it, I see that it reads Majmo3at Louz Tagada (Ensemble Louz Tagada). The photo on the j-card features prominent photos of Louz (bottom right) and the violinist (bottom left) who were both previously with Tagada. According to Izza Genini in the film "Tambours Battant", Mohamed Louz split from Tagada in the early 1990s, though he reunited with them for a live session in the film: 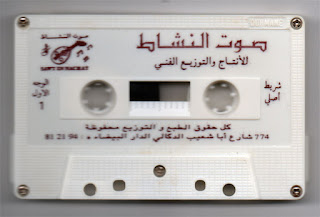 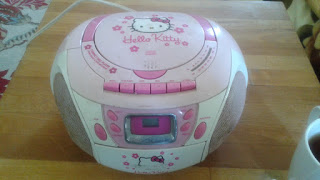 Well look what I found inside the Hello Kitty Boom Box - it's a cassette on the Anzaha imprint out of Rabat! I've shared one other Anzaha cassette here, and it was a good one! 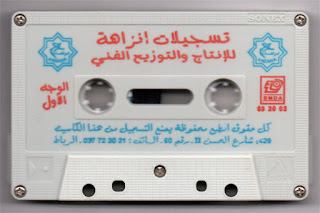 I haven't been able to identify the singer featured on this tape. During the faux-live-audience opening banter at the beginning of track 5, I hear what sounds like the crowd chanting "Kha-di-ja, Kha-di-ja". She doesn't sound like Khadija al Bidaouia or Khadija Margoum. Sounds a bit like Khadija Laboat Al Atlas, but I haven't found any recordings of her that sound quite like this one. Please let me know if any of you can identify her. 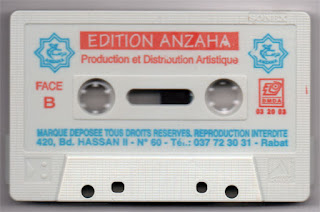 Whoever this chaâbi-singing Khadija is, this is a jamming cassette in the Casa style with riffy viola, plinky banjo-keyboard, and driving varied percussion section throughout (some darbuka, some taârija, some bendir, and some live and/or programmed drum kit. I'd place it around the mid-aughts - the faux-live-audience, the keyboard sounds, and the absence of autotuned voices remind me of Daoudi cassettes from around '04. 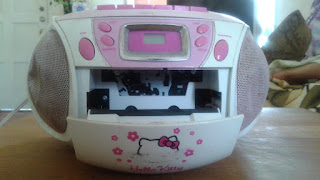 PS, yes, I have a Hello Kitty Boom Box.