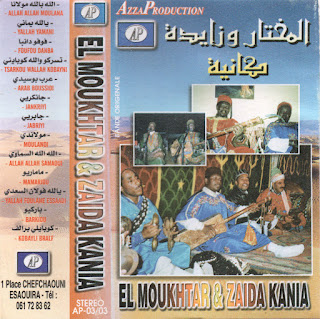 A Gnawa offering to round out the strange year that was 2021. Here's a lovely album from Mokhtar & Zaida Gania. Mokhtar and Zaida are the brother and sister of the late mâalems Mahmoud and Abdellah Gania, and I believe they are the last surviving children of Mâalem Boubker Gania.

Zaida is a mqaddma ritual leader in Gnawa ceremonial life, and of course grew up in a family of Gnawa musicians and ritual practitioners. In addition to performing music with her male Gnawi family members, she also leads all-female haddarat percussion groups: 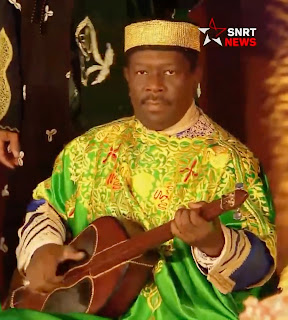 Mâalem Mokhtar has performed in traditional and fusion Gnawa settings. His singing voice is deeper and more resonant than that of his late brother Mahmoud. And he plays this badass guinbri:

The tracks of this album feature an appealing variety of textures. Gnawa music in its traditional form stays pretty uniform in terms of texture (a guinbri, some qarqabas, and some male call/response vocals). It's a great texture, and sometimes that's exactly what the doctor ordered. But sometimes it's nice to change things up too. On this album you get: songs with added percussion (A2, and especially B5), songs with Zaida singing lead (A1, B1, B2, B5) or along with the male chorus (A1, A3, A5, B4), and songs with a tenor sax (A4, B2).

Female and male voices together in Gnawa music don't always work for me, but in this instance the combination sounds great - perhaps the fact that it's family makes the blend organic. Men and women of the Gania family can also be heard singing together on Maâlem Mahmoud's 1994 album with Pharoah Sanders The Trance of Seven Colors, and the blend there is likewise wonderful.

The use of tenor sax on this album also hearkens to The Trance of Seven Colors. In fact, it's the only other recording I can think of that features a full Gnawa group augmented only by a saxophone. Typically when you hear a saxophone with Gnawa, you are also hearing other instruments like a drum kit, keyboards, guitars and other percussion. I wish I knew who was playing the sax here - the approach is nice, and somewhat reminscent of the way Pharoah played with Mahmoud's group.

Mokhtar remains active as one of the elders of Gnawa music in Essaouira. His performance with his nephew Houssam was one of many highlights of the huge Gnawa concert that was broadcast on Christmas day on Moroccan TV. The concert, which was filmed in Essaouira, featured dozens of Gnawa mâalems and koyos from across Morocco. You can watch the entire show, which was very good, on YouTube:

Thanks to all of you who continue to visit Moroccan Tape Stash after all these years. May 2022 bring goodness and joy to you all, and may humans across the planet join hearts, hands, and minds in love and mutual respect to confront the formidable challenges we continue to face. 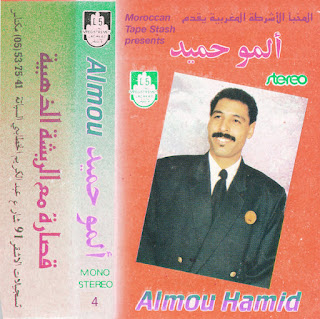 A pair of albums this week, from lotar player and singer Hamid Almou. Like Rouicha, Almou has a groovy touch on the lotar, has a smooth, low baritone voice, and has had success recording in both Arabic (darija) and Tamazight. There's not much information about him online, but I gather from YouTube comments that he hails from Meknes, specifically the Toulal neighborhood.

These two albums feature Almou singing in Arabic. I dubbed them from original copies in 1992 or 1993 in Marrakech. The song "Tfah Jnane Bghitou" that opens the first of these albums is somewhat well known. Several other recorded versions of it can be found online, including one by famed âita singer Khadija al Bidaouia (https://www.youtube.com/watch?v=X7I-aX2jwPU). I don't know whether Almou is the originator of the song or whether the song existed before he recorded it. It works remarkably well as both a viola-driven âita-styled chaâbi song and as a lotar-driven Zayane-styled chaâbi song.

Digital research note: As with any Arabic or Amazigh name, there are many different ways of transcribing المو حميد with Roman letters. A Google search for the name returned results that included Hamid Almou, Hamid Al Mou, Hamid El Mou, and Hamid Alemmou. it also returned this image:

Iconographic note: Since I didn't have images of the original j-cards, i went fishing on the internet to find something appropriate. I did find an entry on Discogs for an album by Almou, also on the imprint Enregistrement Lachkar, though it's not the same album as either of my dubs. The album refers to Almou as الريشة الذهبية "The Golden Plectrum" (richa being the Arabic word for both 'feather' and 'plectrum'). Anyway, I pilfered the image of the j-card and tweaked the colors to create mock j-cards for these 2 albums, shamelessly adding Moroccan Tape Stash branding in English and Arabic. Thanks and apologies to the original uploader Hackente.

Hamid Almou does not appear to have a web presence on either Facebook or YouTube. As far as I can tell, he is still active and performing. He sounds good in this live clip from 2014: 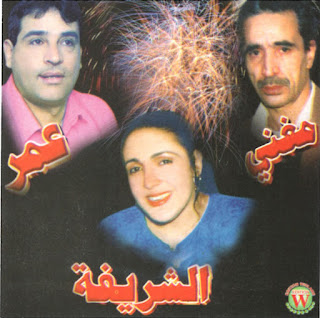 Here's a beautiful album by a trio of great artists from Khenifra (Magni and Cherifa) and Khemisset (Boutmazought). I love the sparse texture of this recording - just the lotar, a single bendir, and verses sung in rotating fashion by each of the three distinctive singers. In the clip below, the first singer is Maghni, followed by Cherifa and then by Omar:

We wrote about Maghni in our previous post. The fiery Cherifa Kersit is among the most celebrated singers of the Middle Atlas region. You can find her biographical sketch and more of her music at the Arab Tunes blog. The deep-voiced Omar Boutmazought is a singer and lotar player whose career dates back to the 1990s. You can find more of his music at the Moroccan Tapes site.

This album comes not from my physical media stash but from my hard drive (aka my file stash). It was shared 11 years ago by AbdelSMB at his long dormant site The Silence Has a Voice, and the Real Music Teach You the Silence. Shout out and well wishes to Abdel, wherever he may be - he has disappeared from Facebook and Twitter. I've uploaded his audio and image files and retagged the songs to include their titles. The CD appears to have been issued in 2007, but an image of the cassette issue of the album indicates a 2003 release date (https://www.youtube.com/watch?v=7ZPy1D_kImg). 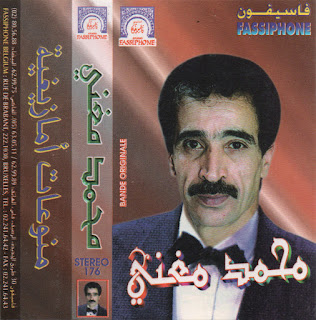 Back to Khenifra this week for a tape by the renowned Amazigh singer, songwriter, and lotar player Mohamed Maghni. Born in 1950, Maghni comes from the same generation and milieu as Rouicha. Though he is less well known than Roucha, Maghni's songs are considered by aficionados of Amazigh song to be of higher artistic stature.

I'm not able to find many sources of information about Maghni's career and music, though all sources note the sensitivity and deep feeling of Maghni's poetry and melody. Two articles ([1] and [2]) state that Maghni's songs directly address social issues related to the experience of Imazighen, and that his uncompromising artistic stance led to his marginalization for many years outside of the mainstream of Moroccan music. (His Arabic Wikipedia entry states that worse things happened to him as well.)

Maghni has worked with other great singers of the region such as Hadda Ouakki and Cherifa Kersit. I don't know who is singing with him on this particular tape.

Maghni appears to be alive, well, and celebrated today. He was honored at the 2014 National Festival of the Lotar [3], and was even fêted in an episode of the Moroccan celebrity tv program Masar in 2016 (https://www.youtube.com/watch?v=ezPGoN0Ffqo).

There's not much of Maghni's music at the usual streaming sites like izlan.fr or izlanzik.org. There are, however, many clips of Maghni on YouTube, though with little documentation as to provenance or historical period, The YouTube channel Fazaz Arts has an extensive collection of these: https://www.youtube.com/user/SuperElmekki/search?query=%D9%85%D8%AD%D9%85%D8%AF%20%D9%85%D8%BA%D9%86%D9%8A

Posted by tim abdellah at 8:56 PM No comments: 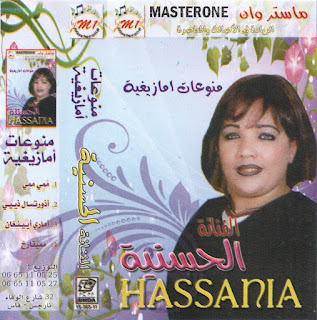 Continuing with another Tamazight tape this week, this one by the powerhouse singer Hassania. Born in Errachidia, she grew up in Azrou, where she continues to perform. This album is on the imprint Masterone out of Fes. In the late 2000s/early 2010s, the great Rouicha Mohamed was also recording for Masterone, and Hassania was featured as a vocalist on 4 of his albums during this period. [1]

Tracks A1 and B1 are more pop-oriented, featuring prominent use of keyboard and other instruments as well as wider sung melodic ranges, while tracks A2 and B2 stick more closely to the bendir and viola format, with the narrower melodic ambitus typical of Middle Atlas Amazigh song. I wish I could understand the lyrics, but even without that, the expressive power of her singing is formidable.

Another track from this album was uploaded to YouTube by Izlan.fr. The clip includes the Tamazight lyrics transcribed in both Roman and Arabic letters. It also credits the track to Hassania along with the viola player El Mansouri Houssa. You may also enjoy the accompanying video of someone driving around northern Bretagne.

Hassania is still active performing. Here is a great live clip from a party in Azrou just before COVID, accompanied by a nice band with drum kit, several bendirs, viola, and an unobtrusive keyboard.

[1] 2018 Interview with Hassania on Amazigh Scoop (in darija) https://www.youtube.com/watch?v=LhX5PrUY_80