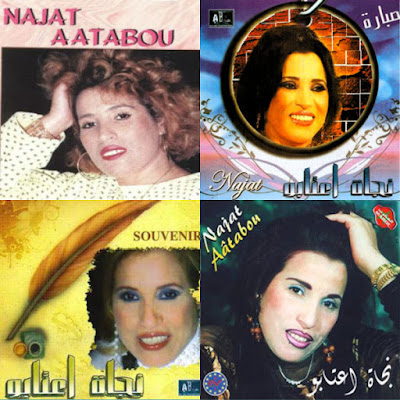 After the success of Nouveau 92, Najat Aâtabou did not return to the oud and bendir format of her earlier hits. Rather, she adopted various other instrumental combinations, moving eventually toward a more mainstream chaâbi sound.

I own copies of some of these cassettes (without j-cards), and have lost a few along the way. Also, some of these are available to stream or purchase online. So I'll mainly post here links to existing web resources and try to piece together her discography between Nouveau 92 and Attention Monsieur (2000). 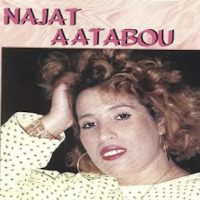 This album came out as a cassette on Edition Hassania in 1993. My copy went missing long ago, but I believe the j-card may have had this photo, which accompanies Amazon's version:

The production sounds similar to that of Nouveau 92, using the same funky synth bass on many tracks. I remember at the time being a bit disappointed with the album, feeling it was less hard-hitting than Nouveau 92, and contained no super-catchy single. Listening to it again now, though, it sounds like a breath of fresh air! It augments the unusual synth and viola texture of Nouveau 92 and fills it out with a more organic early-90s chaâbi orchestra: live strings, bendirs, full drum kit, and an occasional electric guitar. It's a more organic, orchestral overall sound. (Admittedly, I'm a sucker for the chaâbi sound of that era.)

And Najat's singing is spectacular. Those folks over at Edition Hassania really knew how to record her - whether accompanied by a simple oud-and-bendir ensemble or a full orchestra, her voice remains powerful and startling.

The mp3 album is available to purchase and download (or stream) at Amazon for a reasonable $3.99!: https://www.amazon.com/Souaret-Najat-Aatabou/dp/B00ERIW0MW/

This is, I believe, the last album that Najat released on Edition Hassania. I used to have a copy of the cassette. Like the previous albums, this one is also driven by the viola. But the style is different here. Rather than a chanson moderne style of viola playing, hearkening to the smooth sounds of the modern Arab orchestra, here we have a straight-up dance-inducing chaâbi fiddle! The overall ensemble is more simple - bendirs, some oud and melodic keyboard here and there, and what sounds like a drum machine (hi-hat and some fills). Though a return to oud and bendir-s is nice, the chaâbi viola really dominates the mix and doesn't quite work for me. That being said, the tune "Baadou Lhih" is awesome and became part of her live repertoire.

The album's 6 tracks were remastered and released in the US as part of the Rounder compilation CD "Country Girls and City Women", which is out of print. It's worth finding a used copy of the CD - the booklet includes a nice essay, translations of all the song lyrics into English, and an interview with Najat. I can't find any streaming or download options for the album. Here's a YouTube playlist of the album's songs: 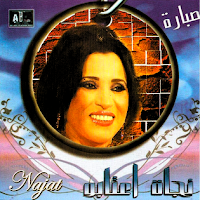 I had a dub of this album, and I remember it being on label called something like "Safa Disque". (It wasn't the well-established Sonia Disque, with whom she would later record.) The leadoff track "Aatani Bedhar", also known as "Mali Ana Ma 3andi Zhar" was a smash hit - smooth chaâbi groups were covering it, and with its singalong chorus of "Wa-a-a-a-ayli", it was an instant classic, and one of Najat's biggest ever hits. I love it!

It was around this time that studio-produced chaabi in Morocco started to sound a bit too perfect and precise for my ears. Though rhythms were still driving and percussive, drum sets had given way to drum machines and programming, which could feel mechanical. Electric guitars for rhyhmic and chordal accompaniment were rarely found anymore, replaced by more versatile synthesizers, which could also add a variety of melodic textures. Even oud-s and violas began to sound more processed and perfect. I tend to like my chaâbi (and most music) a little on the sloppy side - I appreciate being able to hear the human interactions and imperfections.

That said, when all the elements come together in a studio production, it can be great, and that's the case throughout this album. The oud remains prominent in the mix, the real or synth strings (I can't always tell which) support without being overbearing, the rhythm section pops and crackles, the synth bass keeps things funky and in the pocket, and Najat and the backup choir sound great! A mega-post on the ARAB TUNES blog has this album, and many others by Najat! 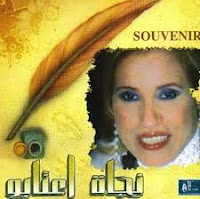 According to this interview, Souvenir, like its predecessor Sabara, was produced by Najat's former husband Hassan Dikouk. It has a similar overall sound to Sabara, and Najat seems to have comfortably settled into a mainstream chaâbi setting. To my ears the sound is a little less punchy - a bit more emphasis on the viola and less on the oud, and the vocals seem more subdued. But when it works, like in "El Aati Houwa Allah" and "Daba Ytem El Nachat", it still kicks.

ARAB TUNES has this one as well, and here's the whole album on YouTube: 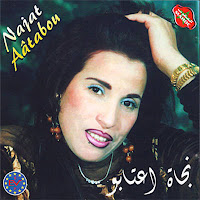 My cassette copy of this (get it HERE) contains a track not available on streaming platforms - a spoken message from Najat to her public, presenting her new cassette, on which, she says, she has tried as always to move chaabi song forward, and that the most important measure of its success is "your entertainment, clapping, and pleasure".

I don't know what prompted the inclusion of this rather apologetic message. Perhaps her moves into mainstream chaabi were criticized by some sectors of the public. Or perhaps she was nervous about the leadoff track, which has a distinct Latin feel and a light programmed percussion track, straying further away from her roots than usual. (This was the era of Amr Diab's smash Egyptian hit "Habibi ya Nour el Ain". Unlike that track, though, Najat's does not include the soon-to-be-ubiquitous-in-Arabic-pop flamenco guitar.) On streaming versions of the album (like the YouTube playlist embedded below, or Amazon's version), there is a bonus track - a chill lounge remix of the title song, with light funk electric guitar and Middle Eastern strings replacing the punchy synth horns of the original.

Outside of the title track (which was not a big hit), the rest of the album features a pretty standard chaâbi texture, though a bit more sparse than the previous two albums. I couldn't quite put my ear on what was different at first. I heard a viola and a synth banjo, some restrained programmed rhythm with a live darbuka. There is a funky synth bass again, though it's very low in the mix as compared to the previous albums. The really key difference here, though is that there is NO BENDIR! Throughout all of her albums, whether based around the oud, the viola, or a full orchestra, the one constant is the presence of the buzzy bendir! On this one, though, the only buzzy timbre you can hear is the occasional taarija. The low percussive tones, are not buzzy booms, but clean synth bass drums. Which is a weird idea, but it sort of works for me.

The viola-centered sound of this album hearkens to 1995's Taqi Fia Allah, but with punchier rhythm and overall sound. Again, the chaabi viola isn't my favorite instrument to hear with Najat Aâtabou's voice, but this ain't bad.

I saw Najat Aâtabou do a concert in Casablanca in 1999, and the only songs she did from any of these 5 albums were "Mali Ana Ma 3andi Zhar", from Sabara and "Baadou Lhih" from Taqi Fia Allah. But although these albums may not be packed with hits, there's worthwhile material on all of them. My ear for Moroccan lyrics isn't developed enough to critically assess Najat's 1990s songs in comparison to the earlier hits that brought her to fame. A lot of the same themes seem to pop up - complaints about romantic relationships, trying to keep things cool with mom, patience, acceptance, and calling out hypocrites. Her turn toward a mainstream chaâbi sound strikes me as a way for her songs of support and solidarity to resonate with a broader community of Moroccan sisters. At any rate that's my interpretation for now. Am happy to hear other opinions.

Wishing a blessed Ramadan to you all. Thank you for continuing to visit, even though I seem to only post about Najat Aâtabou these days! I promise I'll get some other stuff cued up soon...
---
UPDATE: Here is another Najat album from the 90s that I didn't know about: