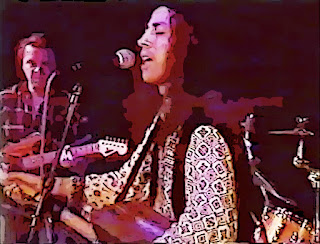 Houssaine Kili is a singer, songwriter, and string player (bass, guitar, guinbri, mondol, lotar...), originally from Agadir, who notably collaborated with the German rock group Dissidenten for a series of albums and tours in the 1980s.


The origin of these collaborations is recounted in the notes to Kili's first solo album. Kili has released 2 solo albums, produced and recorded in Germany: Safran (1999) and Mountain to Mohamed (2001).

From what I could find online, Kili appears to have led and toured with his own band throughout the 2000s, and he did some touring with jazz pianist Omar Sosa after participating in the latter's album Sentir in 2002. I couldn't find much online trace of Kili more recent than 2009.

Although I can't fill in his more recent history, I can share a fantastic live tape that gives an idea of what he was doing between his departure from Dissidenten (1988) and the release of Safran (1999). The Safran notes state that "Kili left [Dissidenten] in 1988 and started working on a solo project", but no details of this project are given. If this tape is any indication, it's a shame that this project did not result in an album.

The tape reveals a fully realized fusion band, drawing heavily on Gnawa source material, and performing thoughtful, tight, punchy arrangements. The tape came into my hands in Marrakech in 1992, and I was told it was recorded in Germany. That seems likely, though the introductory narrration to the first song, "Marrakech", is in French, and some of Kili's banter is in English. (Sometimes it's "danke", sometimes it's "thank you".)

Strangely (and disappointingly to me), none of the material from this concert tape shows up on either of Kili's two albums which, to my ear, were good but less exciting than this live tape. Some tracks on Mountain to Mohamed come close, particularly, the fantastic "Kfaya":


Both of Kili's albums, however, aim for a broader mix of textures and Moroccan source materials than the repertoire of the focused, Gnawa-centric live performing unit. I could find barely a trace of this band or these songs online anywhere. The closest I got was a live clip of Kili in 1998 leading a band in a performance of "Ya Sandi".


While the 1998 performance retains a couple elements of the arrangement performed on my tape (particularly the short instrumental transition phrase that begins/ends some sections), it is missing many delightful features of the early 90s version: call/response and harmony from a second vocalist, intricate rhythm guitar work, middle-section breakdown, and overall propulsive rhythmic drive:


It's not easy to keep a North African fusion band going outside of France or North Africa. (Believe me, I've tried!!) It's too bad there's not more recorded music available from the talented and creative Houssaine Kili, and that he wasn't able to find sustained international success over the years. His website remains active, but contains no news or recent updates. I hope he'll resurface with something new and interesting! The most recent clip I could find of him was something very different and very nice:

Posted by tim abdellah at 2:15 AM No comments: