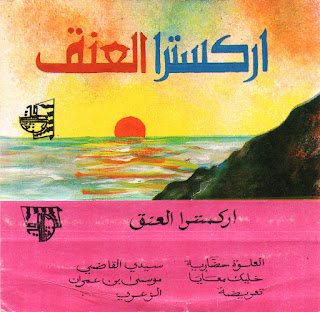 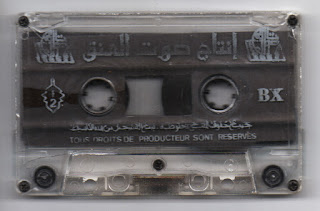 This swell tape comes from a little stash of tapes that fell into my lap a few months back. All without j-cards and most with only the name of the production house on the cassette shell. This one is from a company called Sawt el Ânq (انتاج صوت العنق). I'm guessing it's from Casablanca, but only because the singer gives a shout out to the soccer teams Raja and Wydad.


[blogger knows he's seen that logo before, goes digging around in the stash...]

Well - I knew I'd seen that Sawt el Ânq logo before on an orphaned j-card in the stash. (And a fantastic logo it is, too!) Went looking for it, hoping it would reveal the location of the production house. No luck there, but... the song titles were a match for this tape!! The tape must have bounced around among the Moroccan ladies in the Bay Area for 20 years and then landed back here in the stash where its j-card was waiting for it!

Also, my friend Jamal confirms that El Ânq is a neighborhood in Casablanca, so we're pretty sure this is a Casa production.

This is some vintage late 1980s chaâbi. Hope it hits your sweet spot too!

Yacht Rai - Ready for Summer with the Brothers Bouchenak 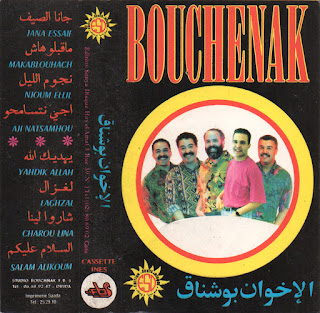 Here's a ready-for-summer album by Bouchenak (a.k.a. Les Frères Bouchenak), a longtime fixture on the Moroccan pop music scene, out of Oujda in the east.

I promise you, I resisted the urge to call this Yacht Rai. If you are a longtime visitor to Moroccan Tape Stash, you know that I don't easily suffer facile comparisons with Anglo-American pop genres and groups. (My manifesto is here, but I quickly violated it here.) And it's questionable whether Yacht Rock is even a true genre. (The term originated in a series of YouTube comedy shorts.) But the urge here was strong - colorful tropical shirts, feel-good unthreatening and smooth pop grooves, and era-appropriate facial hair screamed out "Yacht Rock" to me.

But yea, I resisted. No, I told myself, I am strong enough to not give in to the urge to make a silly, superficial comparison. I'm mature enough to say something objective and insightful about this album, to place the interesting Bouchenak band in its proper historical context - this 1992 album coming after a decade of albums which saw them experimenting with combining local forms from the Moroccan east (a musical/cultural terrain similar to Oran in the Algerian west) with a rock band format (electric guitar, keyboard and drums). Similar in some ways, but different in others, from what musicians in Oran and Sidi Bel Abbas were doing with rai music in Algeria around the same time. (Dig, for instance, this unusual 1984 album, still available over at the Snap, Crackle and Pop blog. See also the comments for a wealth of historical info about the Bouchenak Brothers from H. Hammer.)

Verily, I would resist the pull of the Yacht Rai moniker, even though my own personal introduction to them was seeing them onstage in Marrakech in the summer of 1992, where they followed a combined performance by Nass el Ghiwane and Jil Jilala (OMG!!) with the silliest, lightest pop ditties, lip-synched (!!!) in those same tropical shirts (!!!!!!!!), and wondering who in their right mind would put these guys onstage after the clearly deeper and more culturally significant NG and JJ!!!!!!!!!!! (But dammit, if that earworm "Aji Netsamhou" didn't dig its way into my psyche anyway!)

And though this album sort of annoys me (it is really lightweight and poppy, and features no electric guitar or drum set like their earlier work), on second listen, there are some interesting things to appreciate: the keyboard sounds and textures are varied from track to track (unlike some rai albums where keyboards sounds can be monotonous), and the harmony vocal arrangements are quite good. And "Yahdik Allah" actually rocks pretty hard.

I really could have gotten through this entire post without invoking Yacht Rai. Then I stumbled across a video clip for"Jana Essaif", from this album.


THEY ARE LITERALLY ON A YACHT 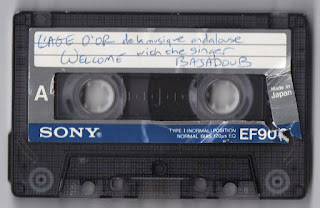 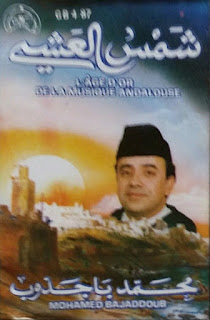 Posted by tim abdellah at 4:42 PM No comments: 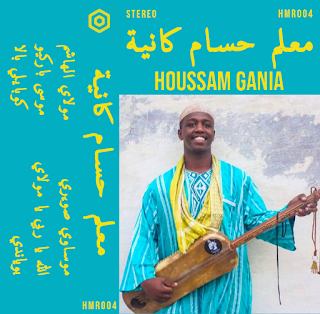 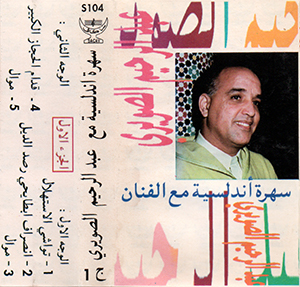 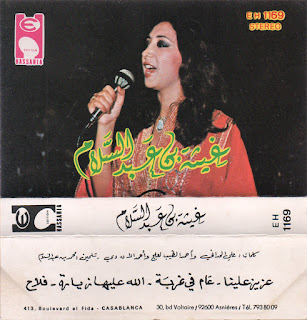