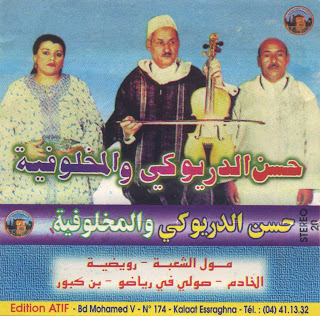 A scratchy viola, a few buzzy hand drums, and some lady vocalists (or men emulating them) who milk 3 or 4 piercing pitches all night long. It's aita haouzia - rural Arabic song from the region of Marrakech. This is some deep, raw country music. No darbuka-s here - just the down-home buzz of the little clay ta'rija and the bendir frame drum.

The vocalist is the late Shikha Makhloufia. I believe she's the main vocalist featured in this clip:

The viola player is Shikh Hassan el Dariouki (I've also seen it written "Darouki"). His troupe Oulad El Haouz is regularly featured at national festivals and on state-run TV to represent this style of music. (On good days I also used to find them on the Djemaa el Fna in Marrakech.) Oulad El Haouz is an all-male group, but the men have no trouble singing the same 3 or 4 piercing high pitches that the women sing: 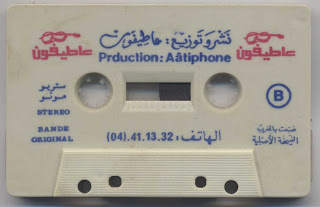 BTW - Track 2 stretched across the break between sides A and B of the cassette. I did my best to merge them into a single track, though the fadeout was a challenge. 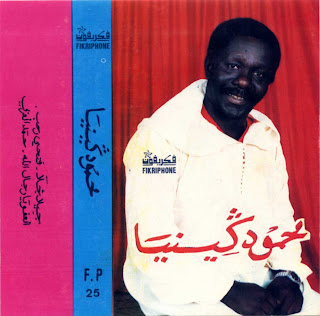 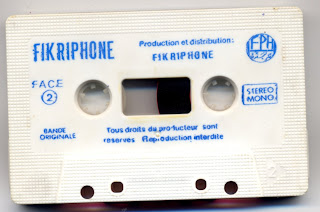 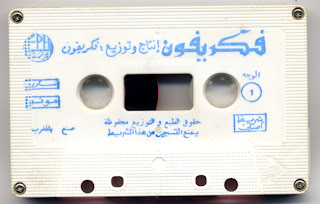 BTW - track titles are mine, not what's written on the j-card.
Posted by tim abdellah at 1:48 AM 4 comments: 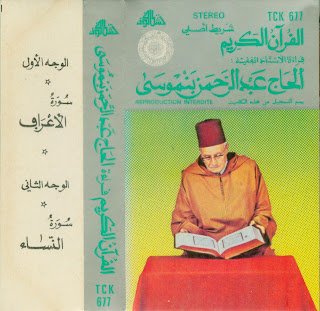 Several fantastic posts this month over at the Oriental Traditional Music from LPs and Cassettes blog. 2 cassettes of the rarely heard Moroccan style of Qur'an recitation that follows the melodic structures of Arab-Andalusian music. I'm told that this reciter, Al-Haj Abd er-Rahman ben Moussa, used to be featured prominently on Moroccan state media years ago. These days, the Qur'an recitation on the Moroccan channels tends to follow a more Middle Eastern model. 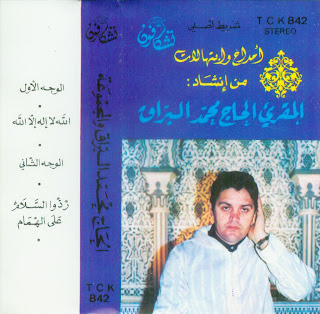 Also available, some lovely a capella amdah and inshad (religious poetry), also in Arab-Andalusian style, from the munshid Al-Haj Muhammad al-Barraq.
Many thanks to Tawfiq for making these available for Ramadan enjoyment!
Visit Oriental Traditional Music from LPs and Cassettes.
Posted by tim abdellah at 4:04 AM No comments: 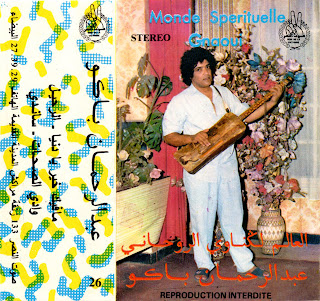 BTW2 - Oops - I linked to the other Paco tape by mistake. Link is now fixed - sorry for the confusion.
Posted by tim abdellah at 11:02 PM 5 comments: