Most Psychedelic Gnawa Tape Ever 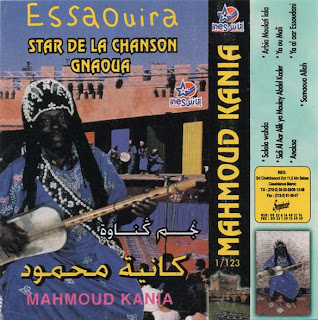 Before Chaabane gives way to Ramadan, here's a good one - one of the strangest Gnawa cassettes I've ever found. Picked this up around 2001 in Essaouira. Nothing about the j-card gives a clue about the psychedelic grooves contained within.

Sounds drop in and out: Indian tabla and bol drum syllables, jaw harp, darbuka, English recitation, guinbri, gong, digeridoo, and various other sounds. But the texture never seems cluttered - all sounds have plenty of space to breathe. I'd love to know more about this album and who collaborated on it! (Especially, who in the world is doing the English recitation!) 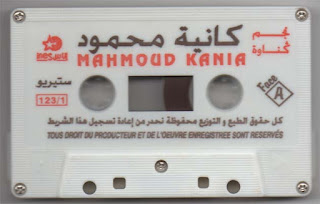 Mahmoud's singing is fantastic - relaxed, often in the lower register. Some of the tracks are built around songs from the Gnawa repertoire (tracks 1, 5 and 6), while others appear to be original to this project. The English recitations are riffs on the Arabic lyrics (or vice versa). And ever think you'd hear Mahmoud sing in fus7a (Standard Arabic)? Check track 8!

Despite the fact that the serial number on the cassette shell matches that of the j-card, none of the listed song titles have anything to do with the songs on the cassette. Track titles here are my own:

I hope to drop another cassette before Ramadan starts. I may not post at all during Ramadan, as I'll be fasting as well as traveling. In case you don't hear from me between now and the end of Ramadan, here's wishing blessing, grace, and peace upon you all!