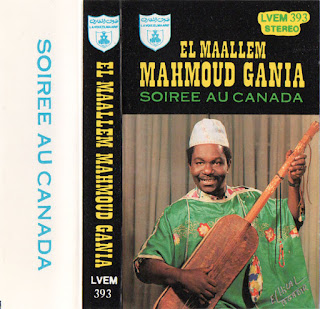 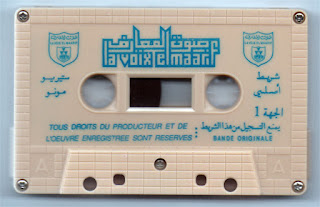 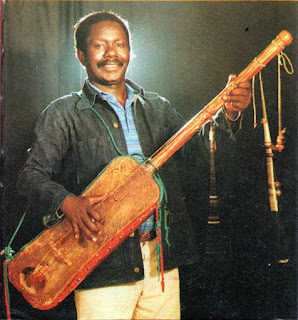 Word from Morocco today is that the great Gnawi master Mahmoud Guinia has passed on. I haven't seen this from any official news sources, but Twitter and Facebook are abuzz with posts about it, and I've seen no contradicting notices. The Gnaoua Festival has tweeted it. It appears, alas, that another great one has left us.

Mahmoud Guinia was, I believe, the first musician to become famous across Morocco as a performer of Gnawa music. Paco Abderrahmane may have been the first nationally famous Gnawa musician, but his fame came from his work with the folk/fusion/revival music of Nass el Ghiwane, not from his work in traditional Gnawa music. Though Mahmoud has engaged in fusion projects over the years, his fame was based on his work in the Gnawa ritual tradition, his many recordings of Gnawa music, and his participation at the national level representing the Gnawa tradition.

A mâllem (ritual master) from an established Gnawi family in Essaouira, Mahmoud was among the first musicians to release commercial recordings of music from the Gnawa ritual repertoire, and he remains perhaps the most prolific. His earliest cassettes were on the Fikriphone label out of Agadir. Later albums were distributed nationally on Tichkaphone out of Casablanca, and on many other labels over the years. There was no such thing as a Gnawa album before he began making them. His recorded work has run the gamut of what a Gnawa album could be - straight-up recordings live at rituals, studio recordings in a traditional vein or in a fusion vein, recordings from the "popular" side of the repertoire or from the heavy trance side. And those are just the Moroccan releases! 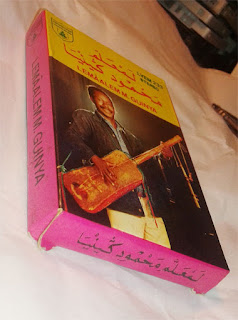 Here is a cassette from (I believe) the 1980s. It does not announce itself as a live album, but side A ends with applause and an announcement in French that the performers are about to take 5-10 minutes for a cigarette break. The recording may or may not be related to a "live album" released on the same label, which I will share in the near future. (Was going to up it today, but there are a few ethnomusicological thoughts pinging around my head, so I'll sort those out and share with you soon.)

Also, can I say how much I love cassettes that come in cardboard boxes! Look - you can stack it on any side and you still can read the artist's name! 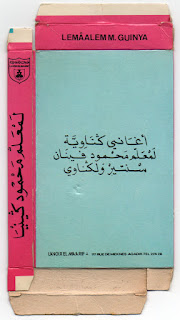 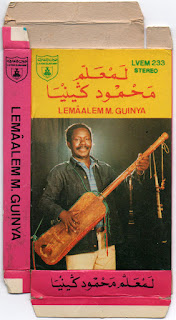 [Note - The title of this post was inspired by le360.ma, who posted an article earlier today entitled "Mahmoud Guinea a déposé son guembri: Adieu, Maître"]