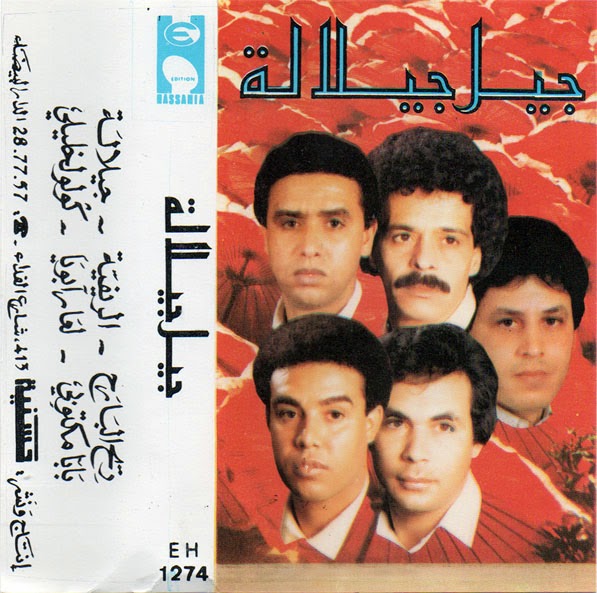 I know the guinbti is not the most important thing to focus on when considering the work of the venerable Moroccan band Jil Jilala. But we're pretty mgennwi here at Moroccan Tape Stash, addicted to the guinbri. So here are some notes on the use of the guinbri in Jil Jilala before Mustapha Baqbou joined the group.

Jil Jilala has had a guinbri player from its very inception in 1972. Founding member Hamid Zoughi relates that when the group was first coming together in Casablanca, they wanted to have a guinbri player join the group. So they drove to Marrakech looking for Mustapha Baqbou. Finding that he was in Essaouira, they then drove to Essaouira. But their friends in Essaouira told them to check out a different, local guinbri player, Abderrahmane Paco. They hit it off with Paco, and Paco hit the road with them to Casablanca. 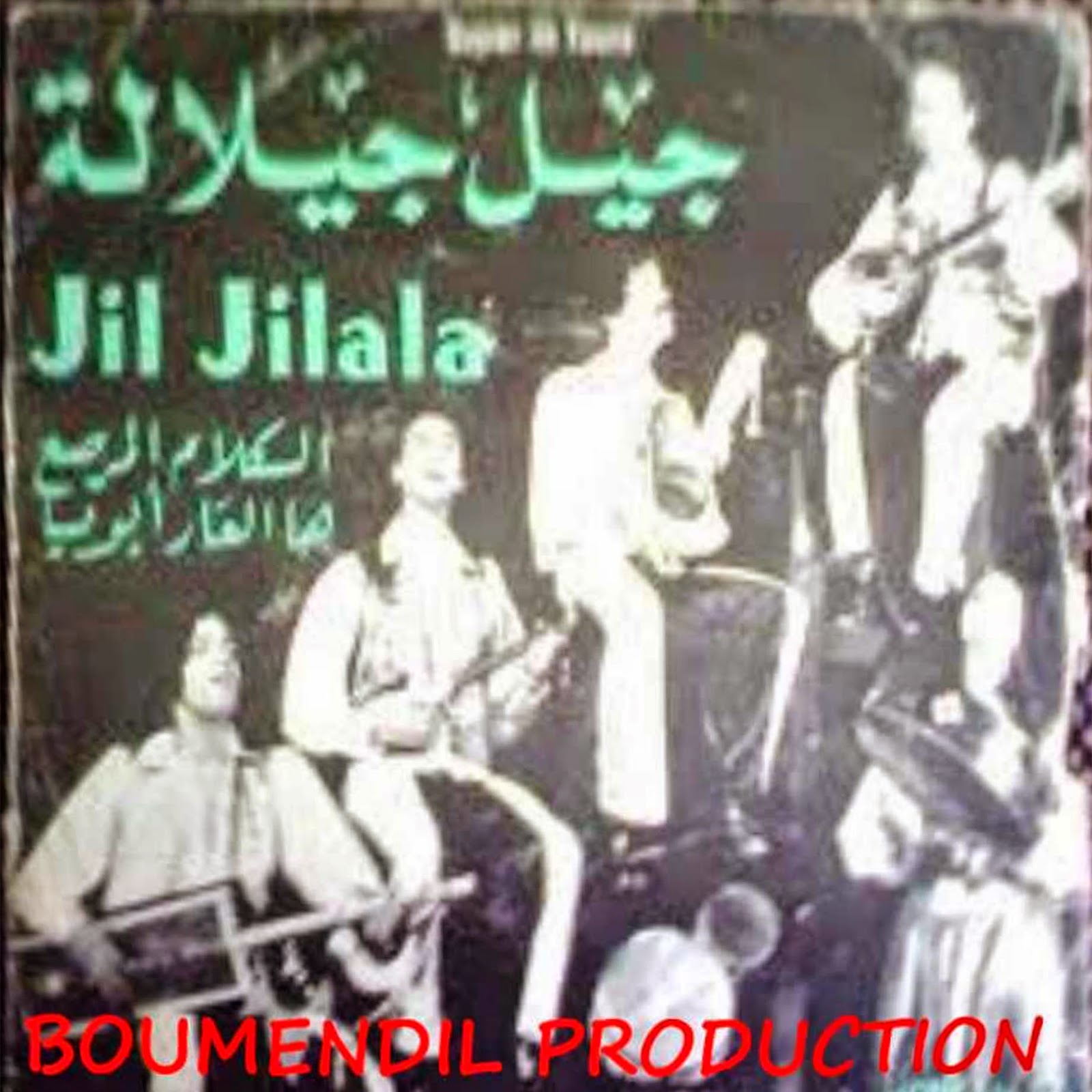 I assume the earliest recordings of the group feature Paco - he's pictured on the sleeve for the single of "Lklam Lmrassa3" above - but I don't hear any guinbri on the recording. I've heard a couple times the story that Paco left Jil Jilala in the middle of a recording session, after getting into an argument about the rhythm of the song they were recording.

Of course, Paco's story continues when he joins Nass el Ghiwane. I don't know why Moulay Abdelaziz Tahiri, the left-haded guinbri player who was in the initial lineup of Nass el Ghiwane, decided to leave that group for Jil Jilala, but it seemed to work out well for all. Here's a very early Nass el Ghiwane concert featuring Tahiri:

One huge difference between Nass el Ghiwane and Jil Jilala is the instrumentation and texture they used. Nass el Ghiwane tended to use the same instrumentation on most songs: bendir, tam-tam, snitra (banjo) and guinbri (plus the gwal, while Boujmiî was still with the group). Jil Jilala, on the other hand, used many different combinations of stringed instruments and percussion in their many recordings and performances. Not to mention the presence of a female singer, Sakina Safadi, in many of their 1970s recordings.

So when Moulay Abdelaziz Tahiri joined Jil Jilala, he was not a full-time guinbri player. In videos from his tenure in the group, he is usually featured playing ta'rija or bendir, as in the clip below - a live performance from Kuwait. Tahiri is the one in the light blue vest, singing the solo verses in this version of "Allah ya Moulana", a song made famous by Nass el Ghiwane.

The typical Jil Jilala song from this period features one stringed instrument (a banjo or bouzouki), and some combination of percussion instruments (bendir, ta'rija, tam-tam, or congas). Now and then, Tahiri plays the guinbri, but not very often on the recordings I've heard.

The last album to feature Tahiri (prior to the 1996 reunion album), according to Smagal is from 1984, entitled "Dawiweh". I haven't found the album, but I did come across an amazing video clip of the title song. The instrumentation is an unusual, shimmery combination of 3 stringed instruments - Tahiri on guinbri, Miftah on bouzouki, and Asbahani on gnibri (something I'd never seen him play before) - plus Derhem on congas and Elkasbaji on bendir. It's a lovely piece:

Tahiri's playing is great, and very different somehow from Paco's and Mustapha Baqbou's. I suppose it's because he wasn't brought up (as far as I've heard) in the Gnawa tradition. I wonder how he learned to play guinbri back in the days before it was widely heard outside of Gnawa circles - it sometimes sounds like he's translating techniques from other stringed instruments (oud, perhaps) to the guinbri.

The only tape I have from Tahiri's tenure in Jil Jilala (whose tracks aren't up on Amazon) is this album on Edition Hassania. The catalog number suggest that it dates from the early 1980s, but many of these songs are from much earlier. (I believe that Nass el Ghiwane similarly "re-recorded their old hits" for an album on Edition Hassania around this time.) The song "Al-âr A Bouya" dates from the group's earliest days (B-side of the 45 pictured above), but is re-recorded here featuring a prominent guinbri. 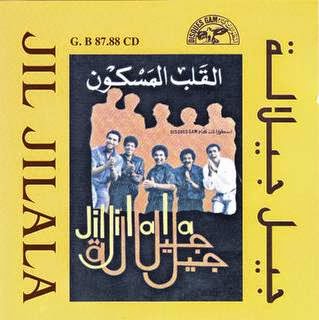 Baqbou joined the group in the mid-1980s following the departure of Moulay Abdelaziz Tahiri (who was originally with Nass el Ghiwane in the early '70s before Paco joined that group). Despite playing guinbri in Nass el Ghiwane, Tahiri was not a specialist in Gnawa music but rather in melhun, a stately old Moroccan sung poetry tradition. With Jil Jilala, Tahiri brought brought a modern, youthful exuberance to old melhun classics like "Chamâa" and "Lotfya", endearing these songs to a new, young audience.

After Tahiri's departure, the group, naturally, took a different direction, with the addition of Mustapha Baqbou. Baqbou had performed in the Netherlands-based folk-revival band Tiq Maya, but was also deeply rooted in the Gnawa ritual tradition. In the 1980s-90s, Mustapha appeared on at least the following albums:
I featured "Hada Wa'dek ya Meskine" in a recent post and I called it "the most Gnawa-influenced" Jil Jilala album. Today's offering, "Lqalb Lmeskun", is perhaps the most Ghiwani of their albums. That is, it comes closest (to my ear) to the sound and feel of Nass el Ghiwane. That ain't necessarily a bad thing - it's a great sound. But it does seem an odd direction for Jil Jilala to take so many years into the its history, and at a time when Nass el Ghiwane's style was going out of fashion. On the other hand, when you have a great Gnawi guinbri player in the group, why wouldn't you use that to its greatest effect and play up the Gnawa influence as Nass el Ghiwane did.

Apparently, these albums were not very successful commercially, and the group changed their approach for the final 3 albums listed above. The most comprehensive and concise biography I could find on the group (in English) was in a post by Smangal at rateyourmusic.com. Regarding this period, he writes:

"In a desperate move to salvage their name, they tried to modernize their sound a little bit by introducing a drum machine to play all their percussive sounds. As a consequence, albums La Tayess and Nour el Anouar sounded processed and mechanical, even if they had good song writing. They tried to follow the trends but failed to gain any noticeable attention, and this made Mohamed Derhem amicably leave the band in 1995."

The use of the drum machine is pretty weird. And even weirder that they would use a synthesized bass to play lines clearly designed for the guinbri, as here, in "Dib el Ghaba", a track from "La Taiesse":

Weird, but it does have a certain charm, and it clearly represents a (perhaps jarring) break from the folky/Ghiwani sound. You can hear it on the latter 3 albums listed above, as well as on Mohamed Derhem's solo album. The album Nour al Anwar in particular features some great songs.

While their albums featured these mechanical sounds, I believe their live performances always featured the organic, acoustic instruments of the ensemble. Check out this live version of Dib el Ghaba - BAQBOU'S GUINBRI RIFFING IS UNBELIEVABLY GROOVY:

My copy of Lqalb Lmeskun is a cassette dub of someone else's cassette. I don't have the album art, so am using Yala's copy of the art from the CD.

Get it all here.
And again, if you want more pristine (though at lower bitrate) digital versions of these tunes, Yala's got 'em here.
Posted by tim abdellah at 3:25 PM 1 comment: