Inerzaf - The Classic Line-up with Hamid and Lahcen 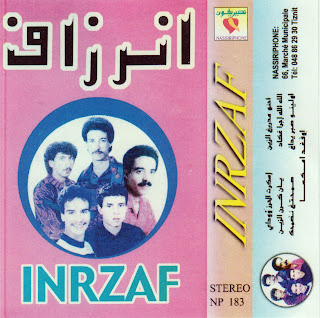 Today's tape comes to you courtesy of Mr Tear, curator of the Snap, Crackle & Pop blog and host of the The Junk Shop radio program. It's a good one, too - a vintage tape from the group Inerzaf (or Inrzaf). Thanks, Mr T!

Inerzaf ("Wedding Guests") came together in the early-to-mid-1980s in the area of Agadir. Like tagroupit contemporaries Oudaden and Ait Lâati, Inerzaf were inspired by the wave of 70s groups like Izenzaren, Archach and Ousman, but drew more heavily on Soussi Berber musical sources, such as the amarg/rwayes tradition. And like Oudaden and Ait Lâati, Inerzaf used the distinctive combination of electric guitar and banjo.

The most renowned version of the group seems to be the one including both composer/singer/bendir player Lahcen Bizenkad and banjoist Hamid Baih. A highlight of this line-up is Hamid's virtuosic banjo playing, which is universally praised in online video comments. This version of the group was together from the mid/late 80s to around 1995. They are pictured on the j-card above and are featured in the live video embedded below:

All members of the group remained active after they split in the mid-1990s. Hamid and Lahcen both lead groups to this day, and the others have done so over the years as well. All of them use the name Inerzaf, and formations often feature more than one member of the earlier group (e.g., Inerzaf Hamid, Inerzaf Lahcen Bizenkad, Inerzaf Boubker, Inerzaf Brothers, Inerzaf Family...)

Sources: My info about Inerzaf comes primarily from three online musician biographies here, here, and here. Apologies for any errors or omissions.
Posted by tim abdellah at 4:36 PM No comments: