Awad Mtougha - More of That Down Home Moroccan Fife & Drum 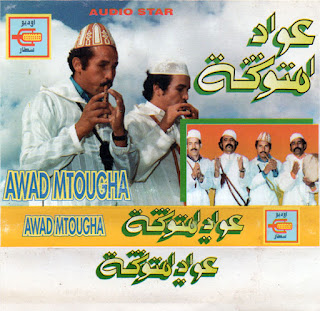 Here's some more of that good âwad-driven ahwach music. Âwad are the high-pitched flutes seen above, Mtougha (or Mtouga) is the area of Morocco from which this particular ahwach style appears to originate, and ahwach is the communal Berber song-dance-singing-drumming genre that differs from region to region in Tachelhit-speaking areas of Morocco.

Here's a bit of a staged performance of the Mtouga ahwach. In addition to the âwad flutes and bendir frame drums, you can see (or at least hear) the tam-tam or tbilat (pair of small kettle drums) and naqqus (struck metal idiophone). And dig the stepping, clapping, and shoulder-shimmying!

Get it all here.
Posted by tim abdellah at 5:19 PM No comments: 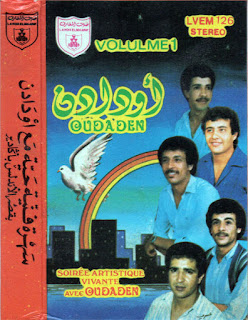 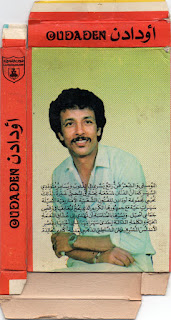 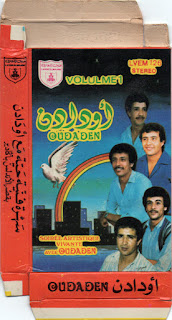 According to Anir at amazighnews.net, Oudaden recorded their first album for LVEM in 1985. (Perhaps this is it? It does say "Volulme (sic) 1".) The author characterizes Oudaden's artistic direction as being different from that of earlier groups from the 1970s such as Izenzaren. That earlier style, which came to be called Tazenzaret (i.e., in the manner of Izenzaren), was characterized both by its "revolutionary" lyrics and by the novel musical compositions of Igout Abdelhadi, who incorporated non-Soussi rhythms and melodies.

Oudaden, on the other hand, represented a return to traditional Soussi rhythms and melodies, albeit with the use of the electric guitar alongside the banjo. Oudaden also specialized in love songs. This style - love songs, traditional Soussi melodies and rhythms, with a somewhat modernized ensemble - came to be known as "Tirubba" (possibly "in the manner of a rub3a quartet"?) or "Tagroupit" (in the manner of a groupe - i.e., a modern ensemble). Oudaden group member Mohamed Jemoumekh, describes these styles as "le chaabi n tchelhit" (Berber chaâbi). 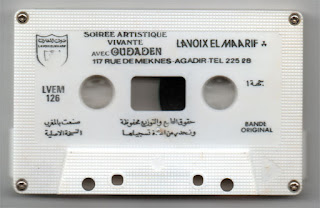 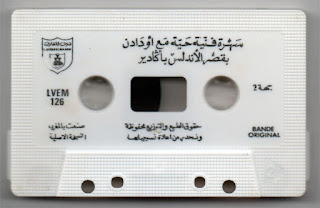 There's rather a lot of tape hiss on this one - I tried to roll off some of it in the EQ. There's loads more Oudaden over at Yala, if you want to sample some other, more hi-fi recordings of theirs.

By the way, the group name Oudaden refers to the bighorned Barbary sheep native to the Atlas mountains.

Like Chaâbi, Tagroupit seems to be continuing its popularity. Moroccan Tape Stash blog follower Owen Buck traveled in southern Morocco earlier this year and was treated, while dining, to a musical performance from an amateur Tachelhit group. I couldn't tell you whether the style is more tazenzaret or more tagroupit, but the great sound of banjos, drums and pentatonic melodies is undeniable. Enjoy some of this performance here:

Posted by tim abdellah at 4:25 PM No comments: 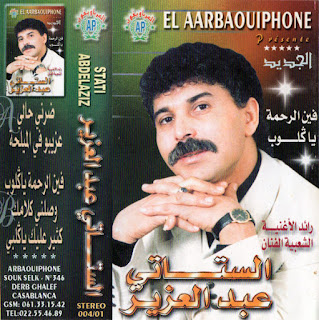 Ah! This is a great album by "The Pioneer of Popular Song", Stati Abdelaziz. Always keeping it rootsy and acoustic, Stati rocks harder than many an auto-tuned viola wielding chaâbi singer half his age. (We've featured Stati in the stash previously, here.)

This album has been a favorite of mine since it came out in 2001. Memorable melodies and undeniable grooves. Somehow the cassette disappeared a few years back, and I was left with only the j-card. Then a few weeks ago, I found this cassette in the trunk of my car: 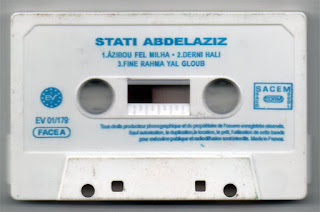 Not sure how it got there - it's not my copy. Mine was on the Moroccan label Aarbaouiphone, while this one is a French edition on SACEM. But hey, I'll take it, and I'm happy to share it here. It ain't perfect (there are a number of dropouts on Side 2), but it's great to hear it again. Hope you enjoy it. 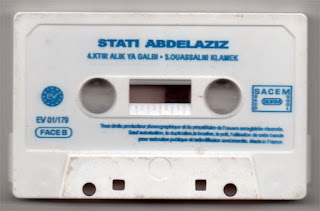 Get it here.
Posted by tim abdellah at 2:21 PM No comments: