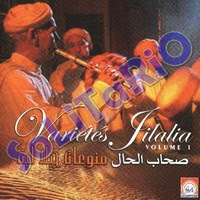 By request, here are two albums of Jilala music that were previously offered at the now defunct WwW.ZizMp3.CoM. These are very nice recordings of a group from Fes. There's more Jilala music in the stash if you like this intense stuff. 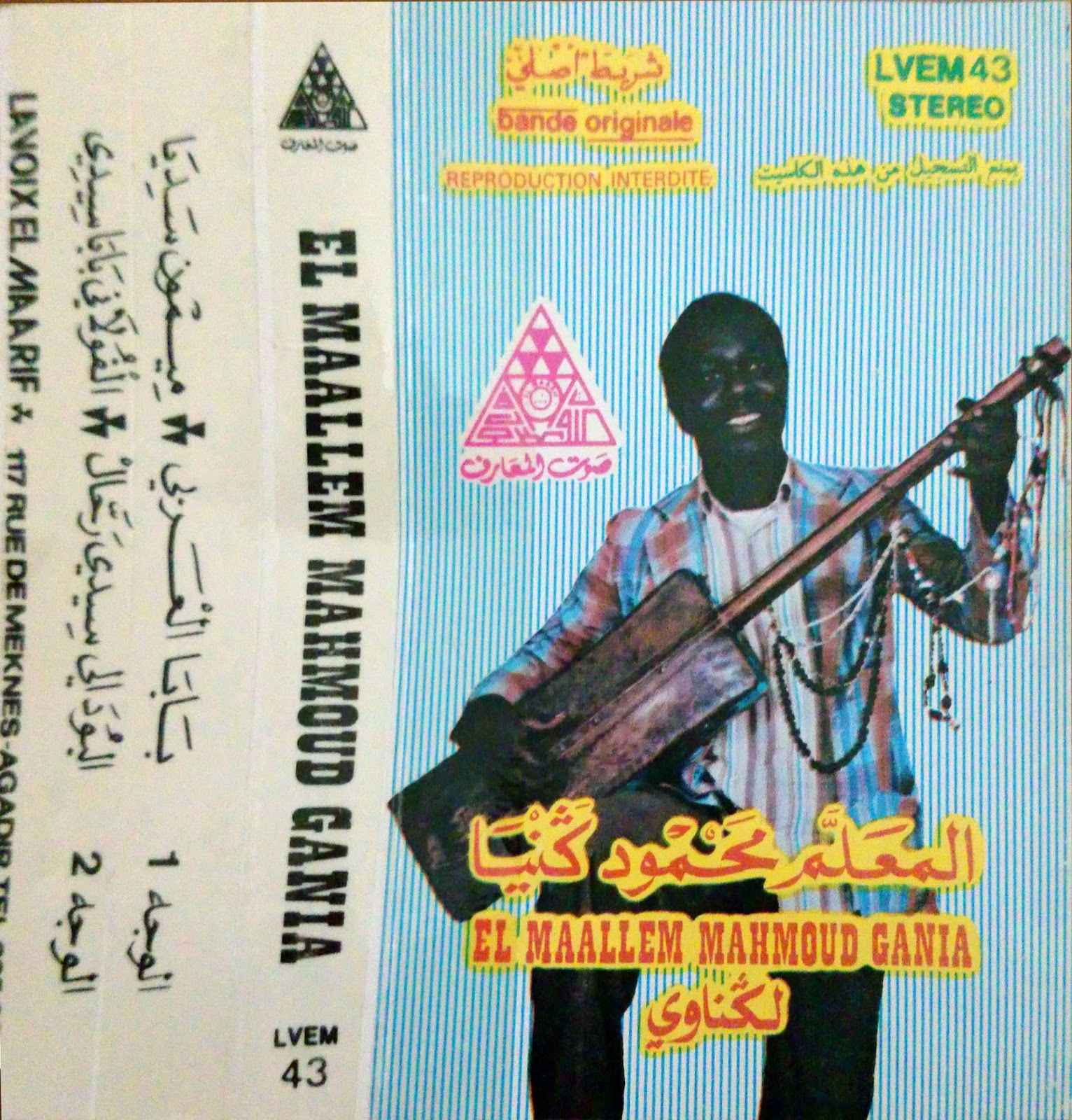 Lokman_ud launches his new blog أرشيف لقمان with a FANTASTIC cassette of Mahmoud Guinia. My copy of this went missing years ago, so it's wonderful to hear it again. The percussion is, for the most part, not metal qarqabas, but something lighter, and Mahmoud's guinbri playing here is more laid back than usual, though the riffing is just as righteous. Overall, it's got a warmer sound than your typical Gnawa music cassette. It's a delight, and you should visit this page and download it right away! 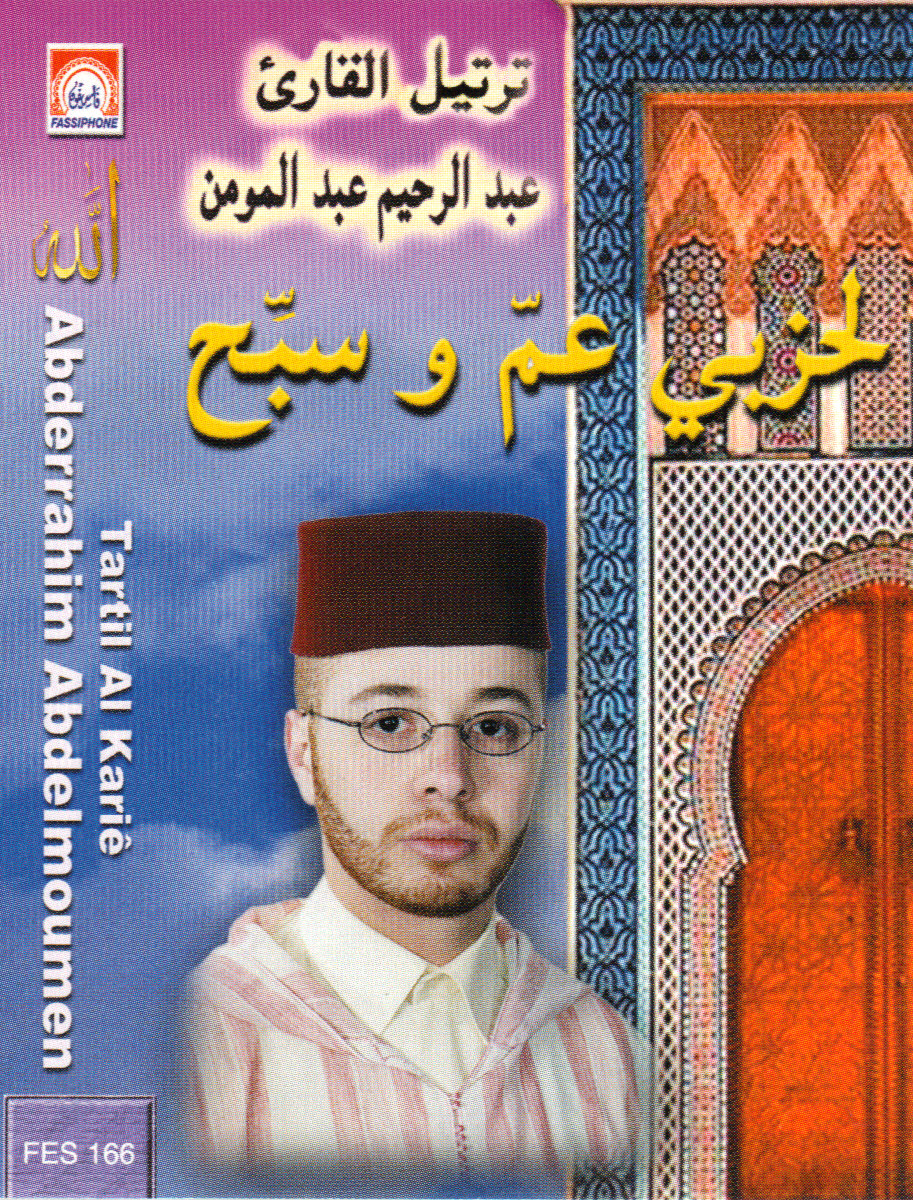 Meanwhile Tawfiq at the venerable blog Oriental Traditional Music from LPs & Cassettes dropped a lovely album of Qur'an recitation by Abderrahim Abdelmoumen, a Moroccan reciter who is also versed in Moroccan Andalusian Sufi singing. It's rare to hear Moroccan melodies and vocal stylings in Qur'an recitation, so this is a real treat. You can find it here. 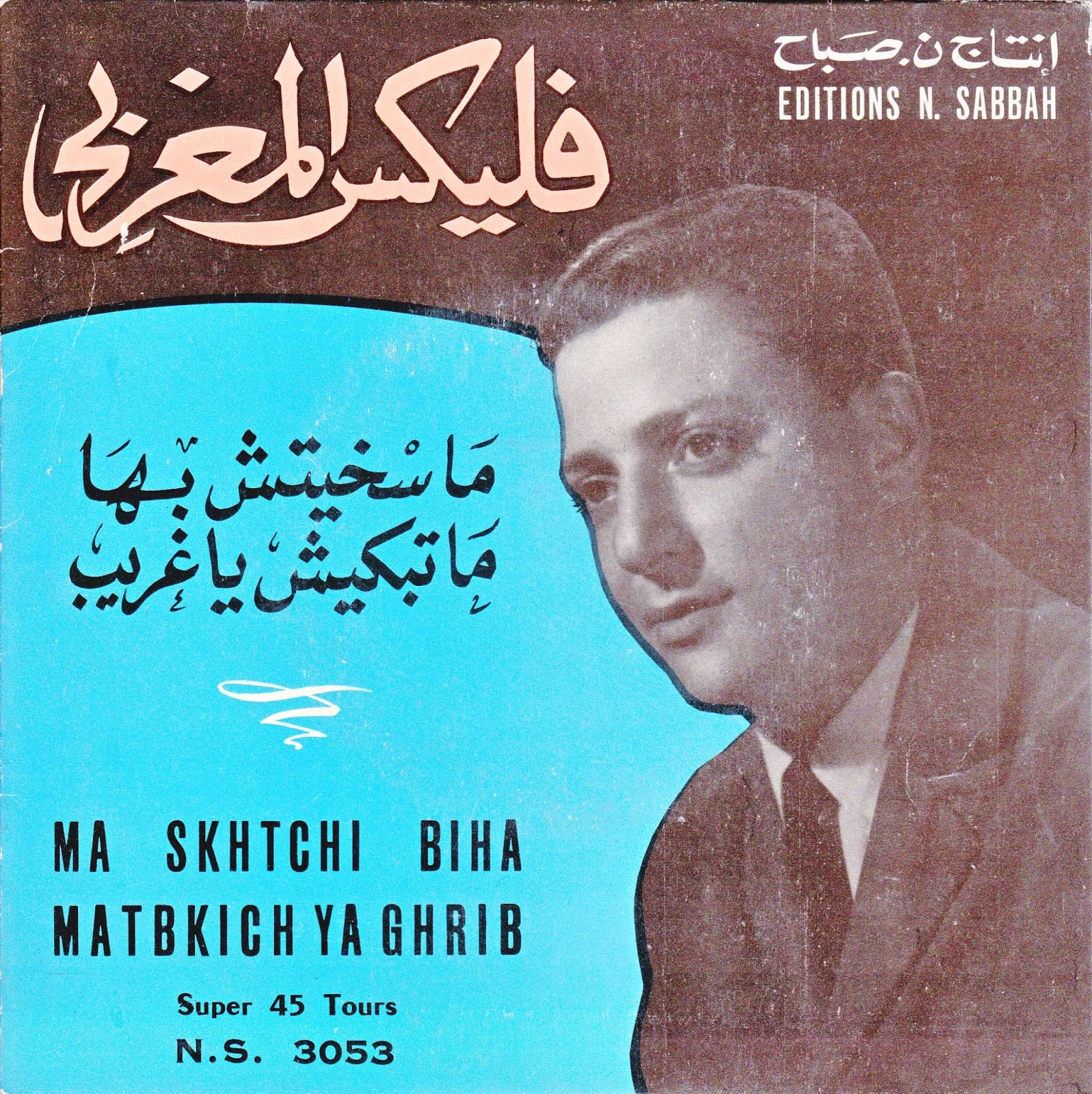 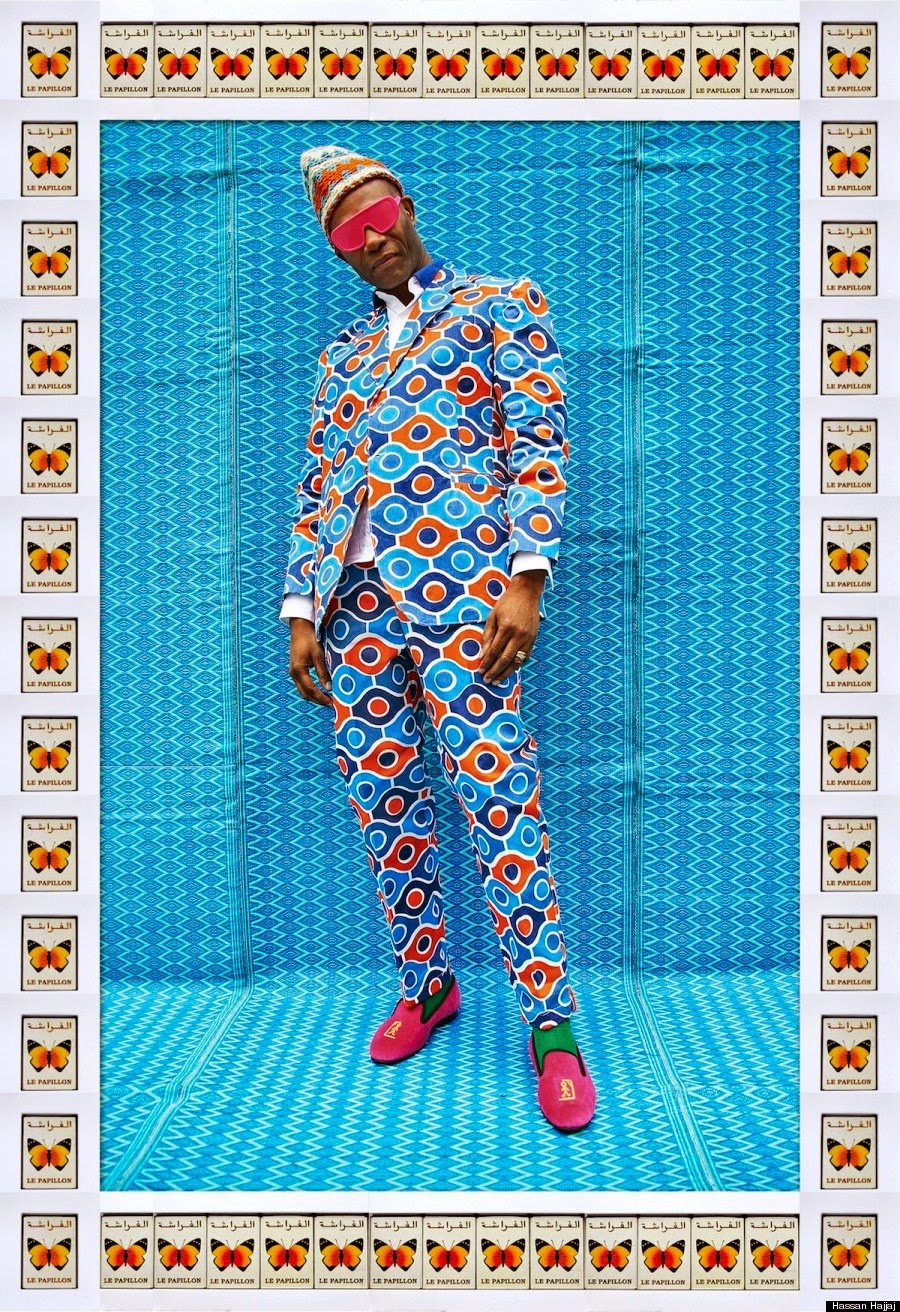 And finally, Gary of Bodega Pop has been hosting a fantastic weekly radio program on WFMU's Give the Drummer Radio online, called Bodega Pop Live. A few months back, he devoted an entire 3-hour program to Moroccan music, covering a LOT of styles and time periods. The program is still archived online, and you can listen here.
Posted by tim abdellah at 1:03 AM 16 comments: 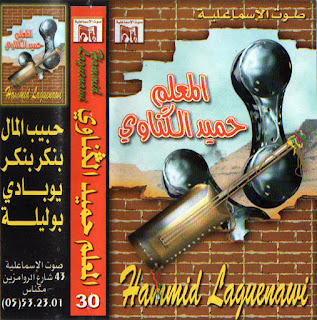 As Chaâbane winds down, here's some Gnawa music for you, before Ramadan arrives. 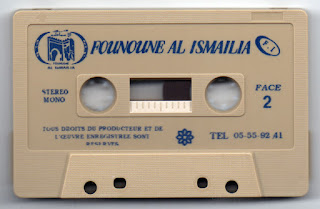 One of two Gnawa tapes I picked up in 1999 in Meknes, this is credited to "Hamid Laguenawi" (Hamid the Gnawi). The other tape is credited to a Hamid al-Hadri, and at one point I wondered if they were the same musician. I just compared them, and they sound nothing like each other - neither the voice nor the guinbri playing. What was I thinking?

Like my other Meknassi tape, this one features songs from the Ouled Bambara suite that opens the Gnawa lila ceremony. In fact, the sequence of songs on the 2 tapes is identical from "Fangoro Fangoro" forward. This suggests to me that this is the typical order of songs in the Meknes lila. (The sequence is different in several ways from the sequence I know from Marrakech.)

Thanks, everyone, for visiting the stash. I'm not sure if I'll be posting during Ramadan, so it may be a few weeks before I'm back here. Best Wishes for a magical summer. And to those of you observing Ramadan, may it be a time of reflection, insight, and inspiration.

Hamid Laguenawi - Sawt el Ismailia 30
Get it here.
Posted by tim abdellah at 2:23 AM 3 comments: 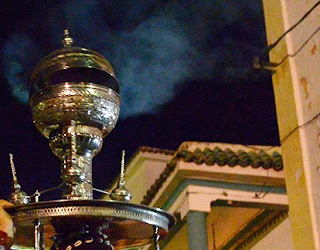 The stash abides! YOU WANT THIS TAPE. You should start downloading it now, then come back and read the blogpost.

This is a tape of Hamadsha songs, apparently from the mid '90s. According to the pixelated Arabic transcription on my homemade j-card (printed from my first computer using my first Arabic word processing program), this cassette was on the Fassiphone label, credited to a group called Ta'ifa al Hamdouchia - Qubbat Sidi Ali ben Hamdouch. I wonder if the group includes Moqaddem Abderrahim Amrani, whose late-90s album on the same label remains one of the stash's most popular offerings.

This is a fantastic album. A short invocation and a shorter coda bookend two looooong tracks of Hamadcha songs. The opening invocation track is just weird - creepy new-agey synthesizer and what could be a guinbri but is hard to distinguish beneath the dripping layers of overdone ambience.

But it's over quickly, and you plunge straight into the organic heaviness of buzzy harraz clay goblet drums driving 10/8 rhythms under blaring ghaita oboes, group male vocals, and the celebratory zgharit ululations of the attendant womenfolk. This is unrushed, unrelenting, insistent stuff. You know it's building toward something frenzied, but it takes it's sweet time. By the end of side 1, you get a sense of where it's going. 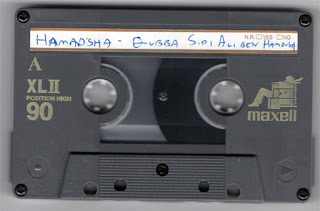 Side 2, however, does not continue this progression. In performance, Side 2's long suite of songs would probably precede Side 1's suite: The ghaitas are absent, the songs feature passages of solo singing in addition to the group vocals, the lyrics seem directed to the Hamadcha's eponym (Sidi Ali ben Hamdouch) and the final song of Side 2 is the opening song of side 1. I thought about reversing the running order of the tracks, but I'm kind of digging the way Side 2's songs follow the Side 1's songs. After 20 minutes of ghaitas blaring, their absence leaves sonic space for the vocals to become starkly prominent and memorable. And the opening invocation and closing "coda" of ghaitas seem deliberately placed. So I left the running order as-is, while naming the 2 long tracks "Part 1" and "Part A" to honor the ambiguity.

I had no recollection of having a copy of this. I found it while looking for some good Gnawa music to offer up before Chaabane turns into Ramadan. It was tucked away on the flip side of a Gnawa tape I dubbed years ago. Hope you enjoy it!