Samaoui and Soussiya - Simulacra and Standards for Weddings, Parties, Anything 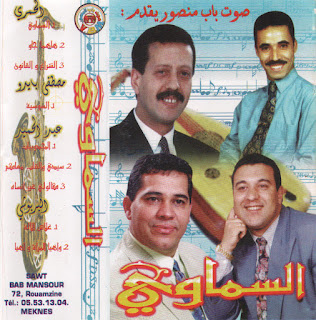 Here's a sampler from the label Sawt Bab Mansour out of Meknes. 4 long tracks each by a different artist. This was released in the sunny spring of 2001 when Orchestre Hamri scored a smash hit with "Samaoui". The song remains popular today. On revisiting the tape, I recognized another song, "Soussia", that is something of a standard at Moroccan parties (at least at the ones I attend in the San Francisco Bay Area). The two songs are quite different, but they share something in common - they both exist within the realm of Moroccan chaabi music, but refer (sometimes with lyrics, sometimes with musical tropes, and sometimes with both) to musical traditions and bodily experiences not native to the chaabi dance floor.

In spring 2001, this song was everywhere in Morocco, coming out of every tape deck, played at every wedding. I even heard Hassan Dariouki's aita haouzia group sing it at a soiree for a bunch of ethnomusicologists in Tangier!

In the early days of Moroccan Tape Stash, I wrote about the early 2000s wave of chaâbi hits that made reference to trance or trance brotherhoods:


"I don't mean pop versions of Gnawa or Jilala songs. Rather, I mean NEW songs with lyrics referring to the spirits or to the experience of trance. What struck me as odd was that most of these songs made no musical reference to trance music of the Gnawa, Jilala or other groups. Rather, they fit the basic mold of chaâbi songs, ready to slip into the repertoire of a wedding band with a viola player and a nicely dressed lead singer"

In retrospect, Al Hamri's "Samaoui / Ha Huma Jaw", while featuring smooth smooth vocals and moderne orchestral string glissandos, does actually make some musical references to the trance traditions. The bendir frame drum is being played in the loopy, topsy-turvy, syncopated way that Jilala musicians play it. The solo viola (as opposed to the orchestral strings) has the unusual processed, throbbing sound featured in Said Senhaji's hit "Aicha al Mejdouba" which, as I noted previously, resembles the throb of the Jilala gasba flute. And the cymbals of the tar tambourine are being played in a way that resembles the qarqaba metal clackers used by Jilala and Gnawa musicians. It's still to my ear a strange juxtaposition:

And yet... the song is undeniably catchy! Our local Moroccan DJ played it at the most recent party I attended, and the crowd ate it up! On the dance floor, everyone sang along "Wa Samaoui / Allah idawi / Aw s7ab el 7aaaaaaal". Samaoui is one of the entities invoked during Gnawa ceremonies. "Oh Samaoui / God heals / Oh friends of the traaaaaance / Bring the incense / bring the charcoal burner / I want to trance". Of course, none of us did trance - there was no incense, no ritual specialist, no guinbri, so it was probably for the best. And yet there we were, miming some of the gestures of trance, mouthing signifiers of trance, to a simulacrum of some of the sounds of trance music. And we enjoyed it, like we did 19 summers ago!

Another staple of our local Moroccan parties is the second song on this tape, here called "Soussia". The term soussia is a noun/adjective that refers to something or someone (female) from the Moroccan Souss region. I don't know whether there is an "original" version of this song, but if there is, I'm guessing this is not it. I've never known a proper title for the song - I just think of it as "A Mwi Lalla", or "that Berber-sounding song that gets sung at non-Berber parties".

In this version, sung by Mustapha Baidou, a metal percussion instrument sounds like a naqqus, drums sound like those used in ahwach performances, melody is based in the Soussi pentatonic scales. Yet the lead singer has that smooth delivery of a wedding band singer, and we again hear orchestral string phrases. And at the end of the track, the music shifts into typical chaabi taârida riffing, dropping the pentatonic mode and the naqqus sound.

As "Samaoui" invites dancers to simulate the hair-flipping, head-bopping of Jilala or Gnawa trance on a chaabi dance floor, when "Soussia" songs get played, dancers' movements immediately shift from the hips to the shoulders, simulating the style of an ahwach dance.

Trance- and Soussi-styled songs make sense in the repertoire of a well-rounded Moroccan urban Arabophone wedding/party band. When you're playing at a party that goes on for hours, you want to be able to vary things up and pace the event. Wedding parties usually start off with slow and stately music to welcome and ease people into the event. So a wedding band should know at least one or two songs from the Andalusi and/or melhun repertoire to provide this function, as well as some long-form chanson moderne classics from the likes of Abdelwahab Doukkali or Abdelhadi Belkhayat. Wedding musicians don't need to be experts in those repertoires - just need to do a passable job on a couple of songs. They will probably throw in some well-known Middle Eastern hits from Egypt or Lebanon early on, to mix up the groove and allow dancers to mix up their moves. But eventually the floor succumbs to the inexorable pull toward the infectious chaabi beat.

Chaabi (literally, "popular"), is a wide field, that ranges from urbane Andalusi melodies to country aita-based melodies and regional varieties, from simmering slow jams to raucous, explosive bangers, from Houcine Slaoui classics from the 1940s to Hamid Zahir hits from the 1960s to Najat Aatabou hits from the 1980s to Daoudi hits from the 2000s to the latest offerings on YouTube. The viola and the darbuka reign supreme. Ouds may or may not appear. (Of course a keyboard can give you that plucked-string sound, and double as a qanun zither, a banjo, or a horn section too.) Chords were once provided by electric guitars, but those have given way to keyboards as well. But whatever the origins or musical textures of songs may be, chaabi performers slot them into musical suites that inevitably end up with the climactic, raucous, joyful 6/8 groove.

Musics come in and out of the urban wedding band repertoire as the years roll on. When rai music was popular in the 1990s, you sometimes heard a few rai songs at weddings. I'm told that in the 1980s, wedding bands would sometimes have some Bollywood tunes ready (or perhaps some faux-Bollywood-styled chaabi tunes?) in case the bride's array of costumes included an Indian-styled outfit. In my day, said array typically included a Berber-styled outfit, so some Berber-styled songs come in very handy in the repertoire for the moment the bride switches to that outfit.

So "Soussi" songs serve a function within a wedding band repertoire, accompanying a particular moment in the itinerary of the bride's clothing trajectory. On another level, they release the dance floor, temporarily, to a different way of celebrating, a different way for the body to let loose and move. This is also the case with chaabi pop-trance songs like "Samaoui" - the dance floor is given over, momentarily, to trance movements and lyrics, letting people groove and move in a different way. But the chaabi imperative eventually brings the floor back from these excursions. Both "Samaoui" and "Soussia" on this tape finish up with an exit from Soussi- and trance-styled lyrics and sounds, bringing it all back home chaabi-style.

Weddings, parties, anything - and trance and Soussi jams a speciality...

PS - I patched a couple of short dropouts in the Al Hamri and Al Berbouchi tracks with versions found on YouTube.