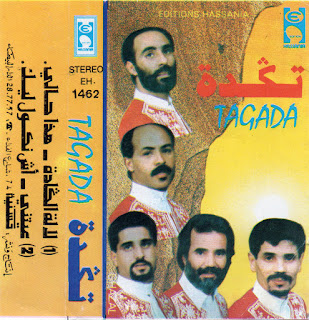 Well whaddya know? The Stash yields another Tagada tape! This dates from around 1992, when Mohamed Louz was still a member of the group. (For some historical info on the group, see our previous Tagada post.)

I wrote previously that Tagada's folk-revival approach was rooted in the âita. This album stretches things a bit, while maintaining a core texture of viola driving the melody, male group or antiphonal vocals and a bendir-driven percussion section.

"Lalla Lgada" leads things off in a typical âita mode, though with what sounds like scissors hearkening back to the âbidat errma. The strange "Ach Ngoul Lik" leads off with a pentatonic viola solo somewhat evoking the amarg tradition of the Soussi rwayes, but then the rhythm enters, featuring a Gnawa guinbri (and some faint qraqeb, I think). It sounds sort of Nass el Ghiwan-ish, except for the continued presence of the viola, which pulls the sound in a different direction. "Âyyitini" goes full Soussi, adding a banjo or lotar and naqqus for that rwayes vibe, though the singing is in Arabic, not Tachelhit.

Finally "Hada Hali" returns viola and bendir to the center of the texture with a real deep âita feel - angular bendir-s, alternating solo vocals evoking shikha song, sliding eventually into trance-based and trance-evoking lyrics, idiomatic viola riffing recalling the sweaty middle-of-the-night when the âita groove gets so heavy and REAL that it crosses over into that zone where all one can do is call prayers upon the Prophet and the saints, hope for deliverance and submit to the groove. At this point in the song, Tagada incorporate the guinbri and qraqeb again. This sounds nothing like Gnawa music, though, resembling much more the saken trance songs of the âita tradition. But with Gnawa signifiers added for intensification? Mixing these elements together is a weird, improbable idea, to which I'm sort of opposed on principle, and yet somehow... it kind of works! Well played, Tagada, well played!