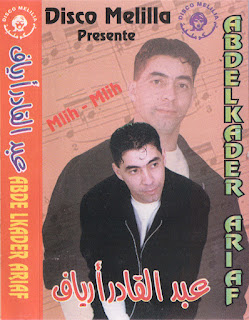 Here's a nice album of Riffi pop tracks from singer/songwriter Abdelkader Ariaf. I picked this up in Tangier in 2001.

Ariaf was born in Nador and lives in Rotterdam [1]. His Facebook page indicates that he performs often in Europe, but I could find little biographical information about him online. There are a couple of video interviews with him on YouTube ([1], [2]), but they were in Tarriffit (which I don't speak) and did not appear to address the beginnings of his career or its trajectory. He first traveled to Europe in the year 2000, but I don't know how long he's been living there.

Ariaf is active on social media (Facebook, YouTube, TikTok), and continues to release new music. In addition to YouTube, much of his music can be found on the international streaming platforms (Apple, Spotify, Amazon), including albums that date back to 1996. This particular album doesn't seem to be available anywhere. 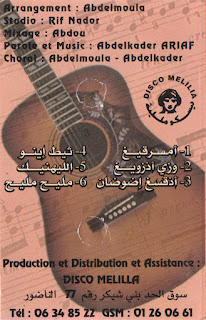 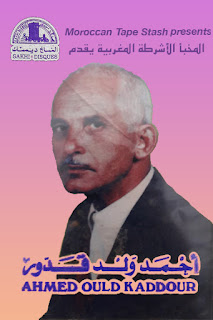 "El Âloua" is one of the most famous and moving pieces of the âita repertoire, a staple at weddings and other parties, performed both by modern chaâbi groups and by traditional groups of chikhate. Like most âita songs, it is not associated with a single performer but rather belongs to the collective patrimony. However, the best version of the song, according to many, is that of singer and lotar player Ahmed Ould Kaddour.

Ould Kaddour was born in 1934 in the town of Ben Ahmed. After performing locally for some years, he began in 1960 to divide his time between Ben Ahmed and Casablanca. Kaddour is sometimes called Moul El Âloua, i.e., owner or master of "El Âloua".

The term âloua in Moroccan Arabic means "small hill" or "hillock". The lyrics of the song "El Âloua" recount the itinerary of a pilgrimage to a specific hillock near Ben Ahmed where a group of saints' shrines are located. According to âita aficionados and performers, Ould Kaddour's version of "El Âloua" is considered the best because of his knowledge of the geography of the region and the location of the individual shrines [1]. Some say that he was the first performer to introduce this level of detail into the song [2]. Ethnomusicologist Alessandra Ciucci writes that the song is "celebrated for its ability to convey images and emotions stirred by the sacred voyage, and for allowing the audience to have the sense of participating in this experience as if it is occurring." [1] (For a deep dive into "El Âloua", its lyrics, the way it emerges in the course of performance, and the crucial role of women performers in shaping it, see Ciucci's excellent article, cited below.)

I am quite taken by Ould Kaddour's lotar playing. Whereas most lotar players use a plectrum, Kaddour strums the strings with his fingers, resulting in a more delicate sound, It reminds me, at times, of the sound of the Mauritanian tidnit.

Ahmed Ould Kaddour remains alive and well as far as I can tell. The most recent news I found was about him being honored at the 2017 National Festival of the Lotar. [3] 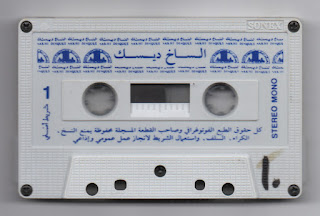 Discographic itinerary (for those who enjoy these things):

Hope you enjoy this tape. And hope you're all having a lovely summer! 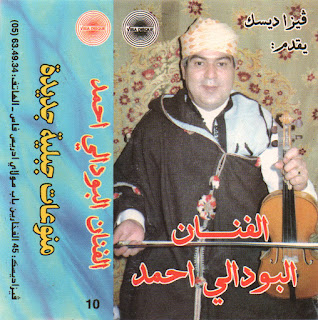 New Jeblia Selections is probably a better translation, but New Mountain Variety (which Google gave me as a translation of  منوعات جبلية جديدة) sounds like something you'd find in the Stash.

And a nice variety it is, too, provided by the artist Al Boudali Ahmed, about whom I can find absolutely no trace on the interwebs. Side A is a nice long track of taktouka jabalia, and side B contains two tracks of Jbala-flavored chaâbi. Here's a pinch:

I picked up this tape during my visit to Tangier in 2001. Find additional varieties from Northern Morocco in my 2013-14 posts here and here.

Posted by tim abdellah at 10:26 AM No comments: