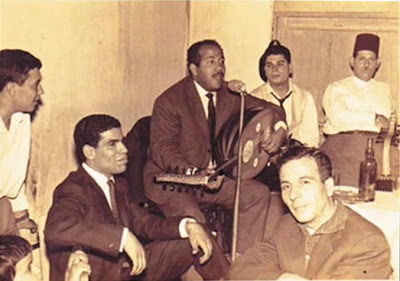 Here's some old school chanson moderne (musiqa 'asriya) from the 1950's-60s. Mohamed Fouiteh was a singer, composer and oud player who recorded a number of memorable hits and composed for other singers of the era.  It was during this period that Moroccan chanson moderne came into its own. Earlier works often featured Middle Eastern rhythms and dialects in order to fit in with the mainstream of Arabic music coming out of Egypt and Lebanon. (Moroccan rhythms and dialect are disorienting and often unintelligible to Middle Easterners.) In the 50s and especially the 60s, Moroccan rhythms and poetic structures were used more often, blending in interesting ways with the orchestral style coming from the East.  In this collection, songs like "Aw Maloulou", "Nhabbou Bla Khbarou" and "Lahbib Lahbib" are a nice mix of the Moroccan 6/8 chaabi rhythm and lyrics in Moroccan darija with the syrupy strings and long-form structures made popular by the stars of the Eastern Arab world. Other songs make use of Middle Eastern rhythms and melodies.

I got this tape from a seller in the Rabat medina who used to have turntables stacked to the ceiling in his storefront business. He mainly sold cassettes copied from out of print vinyl. This one, however, bears no audio trace of turntables or vinyl surface noise, so I'm guessing it's a mix tape of tunes recorded from the radio. The beginnings of several songs are faded in - i wonder if the person who made the tape edited out the talkover from radio announcers.