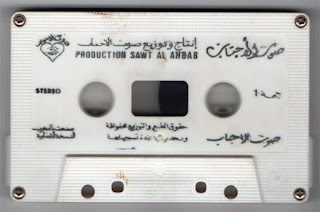 Here's a well-loved cassette from my first trip to Marrakech in 1992. The j-card went missing years ago, but I did manage to scribble "Mohamed Marrakchi" on the box. Preliminary googling only resulted in references to an Arabic singer in Fessi chaabi style:

This was a far cry from the Soussi Berber rrbab-driven sounds on my old tape. Some additional googling turned up a better result, using the more Berber-ish spelling "Amrrakchi": 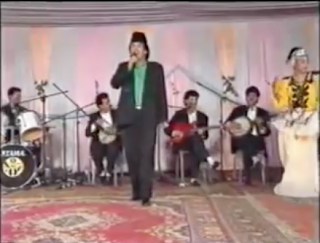 Blogger Ourchifali, who has several posts including lyrics of Mohamed Amrrakchi as well as this great photo here tags these posts with the term "Amarg Fusion". While nowhere near as fusion-y as music from the 2000s by the actual group Amarg Fusion, the electric guitar and drum kit do give the music a bit of what, at the time, was a modern edge. I love the punchy sound added by the kit and guitar. To my ear, they complement rather than undercut the banjo and rrbab. And the melodies are insidiously catchy. Here's some video footage of Amrrakchi with this sort of ensemble:

Mohammed Amrrakchi appears to be the brother of the more well-known Houcine Amrrakchi, who was featured some time ago over at the defunct-but-not-forgotten Snap Crackle and Pop blog.

Get 'em all here.