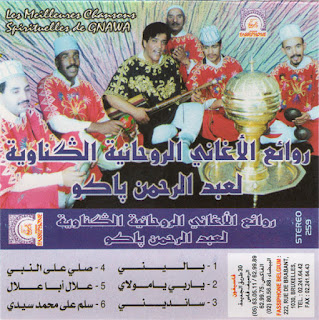 Sad to report the passing of the incomparable Abderrahmane "Paco" Kirouche this past weekend. First musician to explore the resonances between the Gnawa arts and contemporary social issues in a musical way. Others have done so since, none have done it better.

I have written about and shared some of his music - both solo and with Nass el Ghiwane. The tapes in this post are the last 2 commercial solo cassettes of his that I own. The 1995 cassette pictured below was his first solo album after leaving Nass el Ghiwane in 1993. It's an odd piece of work. His guinbri playing and singing are strong, and all the tunes are right out of the lila repertoire, but the musical setting is rather bizarre. There is a synth marimba that works nicely (as it did a few years later for Gnawa Diffusion). The ambient and jungle noises are just strange, and the synth guitar, synth drum and synth horn punches seem designed to jar. This tape really rubbed me the wrong way back in the day. Listening to it now, it definitely has a "feel" to it (though not as transcendently trippy as this masterpiece of Gnawa psychedelica.) Was Paco trying to make an album as different-sounding as possible from his always-acoustic ex-band? 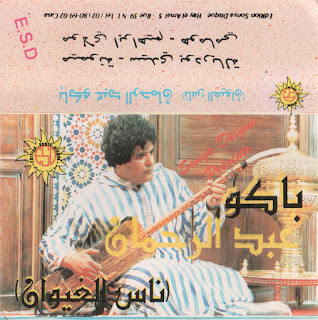 The cassette pictured at top dates from around 2001, and it's a straight-ahead, solid Gnawa tape, though the mix is a little weird to my ear. All songs are from the Ghabawyin (the black "Sons of the Forest") suite which is performed late in the Gnawa lila ceremony. This tape also seems to be late in Paco's recorded work. I've not come across any other cassettes of his, and for most of the past decade I heard that he was sick. Please, if anyone has other commercial recordings of Paco, let me know - I'd love to hear them!

Though neither of these tapes are as earth-shattering as his best work with Nass el Ghiwane, they still brim with the character and intensity that made Paco such an unforgettable presence on stage and in memory. Saha, Mâalem!