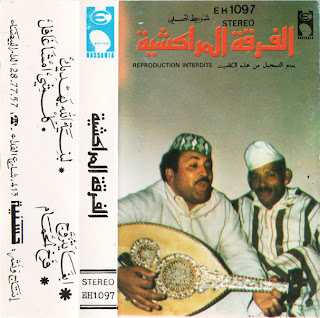 Happy 2013 to all. Sorry for the long absence - tape deck needed a little maintenance, and I guess I needed a little break too. Thanks for the comments and well wishes in the interim!

Still have a bunch of tapes from my summer trip to get digitized and out to ya. For now, though, here's a couple of oldies from deep in the stash. These both feature my fave oud man out of Marrakech, Hamid Zahir, but also highlight a particular member of his group, Si Mohamed Aguir.

The first tape, pictured above, is credited to Alfarqat Almarrakchiya (The Marrakchi Ensemble). It's basically the Hamid Zahir group, but featuring some different lead singers. I'm pretty sure that the singer on some of these tracks is Si Mohamed Aguir, and I think he's the one pictured on the cassette j-card. The only picture I could find online is from the sleeve of the 45 seen in the YouTube clip below. Does it look like the same guy to you? It sure sounds like him:

The cassette contains some tracks that appear on other cassettes credited to Hamid Zahir (#2 and #3 specifically). You'll still want to hear this album, though, if only for the insanely catchy singalong "Lebniya Llah Ihdik" (preview below).

The second cassette, pictured below, features tracks recorded live by Hamid Zahir and troupe (somewhere outside of Morocco, if I'm hearing the introductory comments to track 5 correctly). 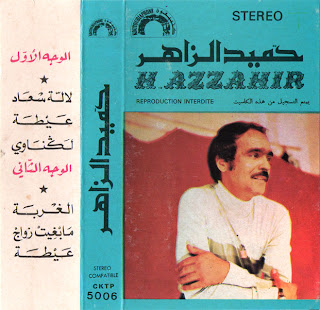 This set features Si Mohamed Aguir singing on track 5. Zahir introduces Si Mohamed as the singer (and, at the end of the song, dancer). You'll hear Aguir's prominent rhythmic footstamping on several tracks. I believe Si Mohamed is the heavy set gentleman clapping, dancing and singing back-up in the following YouTube clip.


Even when he's not singing lead, he's a huge part of the atmosphere of Zahir's performances - adding the percussive clapping, cadential call-outs, and syncopated footwork. The songs he sings are more ironic and comedic than than those sung by Zahir. I don't know if he's still with us, but his good-time vibe is still in effect when the Marrakchi groove hits!

Any corrections or additional info about Si Mohamed Aguir would be greatly appreciated!!

Audio transfer notes: I did a time-pitch correction on track 4 of "Alfarqat Almarrakchi". It always seemed to run too fast to me - now the oud is in tune with that of the other tracks on the tape, though this track was certainly recorded at a different session. The Koutoubiaphone tape seems to me to run on the slow side, but I didn't adjust anything on it.

Discographic note: The Zahir live tape says "Koutoubiaphone" on the j-card, but the cassette shell bears the Tichkaphone imprint. They are one and the same company.

Tagnawit note: Track 2 of the Koutoubiaphone tape contains 2 Gnawa-related songs. "Hada Wa'du Meskin" takes lyrics from a Gnawa song but gives them a different (but still pentatonic) melody. "Lagnawi" refers to the Gnawa melk Sidi Mimoun. However I believe this song has its origins in the Aissawa repertoire - I've heard the melody played at an Aissawa ceremony, but it's not typically played at Gnawa ceremonies.


And of course there's more Hamid Zahir stashed away here and here.