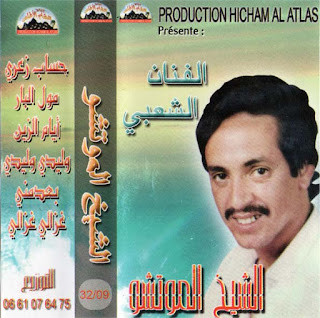 I've referred to Âita with frequency in my posts, and with good reason. It's among the most important genres of Arab music in Morocco. It's well-loved in its own right and it serves as the basis for much of Moroccan chaâbi music. I wish I could give a better overall description of the genre and its variants. For those interested, I translated below a few paragraphs from Ahmed Aydoun's Musiques du Maroc to give some basic musical dimensions of âita and a few interesting tidbits of information. For a deeper analysis of the aesthetics and powerful association held between âita and regional identity, check out the work of ethnomusicologist Alessandra Ciucci.

Today's post features yet another cassette from the Hicham Atlas imprint, this time featuring a violist called Shikh al-Moutcho. I didn't find much info on him web-wise. Settatbladi.com lists an Ahmed Al Moucho, but most of the tunes with his name feature the ghaita oboe rather than the viola. (These tracks are worth checking out though - âita with ghaita is pretty unusual!)

The centerpiece of this tape (for me at least) is the 12 minute "Hsab Zaêri". I love pieces like this - short vocal couplets alternate with long passages of doing-it-to-death viola riffing, and are punctuated by syncopated accents on the bendir. In comments on a previous post, Hammer dissertated on âita zaêriya and described the practice called "Hisab Al-Za'ari" as a competition between singers.

(Hammer - hoping you may weigh in with some info on Shikh al-Moutcho - I notice that you mentioned his name in the aforementioned comments - any info is, as always, greatly appreciated!)

Unfortunately the shikhat singers featured on this recording are unidentified, and I can't tell how old these recordings may be. I picked up the tape in 2012 in Kasba Tadla or Beni Mellal. Hope you enjoy, and Happy Father's Day!

UPDATE: Forgot to mention - Track 2 "Bâd Menni" features the same melody as Najat Aâtabou's famous "Shouffi Ghirou" (as featured here). I wonder if it's a traditional melody that Najat borrowed or if this track borrows from Najat...

It is primarily in the plains bordering the Atlantic where al 'âita is most appreciated. Specifically, the genre is practiced in the regions of Shawiya, Dukkala and 'Abda, that is to say, in the Casablanca-Safi axis. Al 'âita is also found in the plains of Z'ayer, in Beni Mellal and in the Hawz, for which variants are named. The term 'âita is also used to refer the song of the Jbala, incorrectly referred to by the name taqtüqa jabaliya. Finally we have found the term in the hadra of the Hmadsha of Essaouira, where it refers simply to the instrumental part that introduces the trance.

Two different interpretations can be made of the word 'âita. According to the first, it would be a derivation of the verb 'ayyat (to call, in dialectical Arabic). According to the second, it would be a deformation of ghayta (folk oboe). We prefer the first version since it is effectively a call - nearly all of the 'âitas begin with the invocation of Allah and the saints. The act of calling has several other connotations - anticipating, searching, asking for inspiration.

Al 'âita takes different qualificative names by region; it is Marsawiya along the coast, Za'riya, Mellaliya and Jabaliya. In addition to these principal variants, there exists at Safi a special 'âita called Haçba, its repertoire limited to several examples of the genre.

With the exception of Za'riya, which is monorhythmic, all of the 'ayût feature changes of rhythm, usually in three progressively faster sections.

The 'ayüt are often sung by a group of mixed men and women. In cases where the latter are absent, one of the men of the group wears women's clothes and imitates women's voice and dance. The 'âita of Wlad Hmar is a good example of this.

During the second half of the 19th century the 'âita had its hours of glory  with the Qaîd 'Îsa ben 'Umâr al 'Abdi who was, it seems, a connoisseur. His house attracted the best musicians and singers whose performances were graciously rewarded.

According to Mohamed Abu Hamid, the 'âita genre grew from its simplest form of expression, al muqlâ' (the distich), to become over time an elaborate composition best exemplified by the Marsawi variant.

The Marsawi is composed of two parts of contrasting rhythm and character. Each part is comprised of strophes (qatibât) linked by cadences and poetic transitions (hatta). The 'âita ends with a sadda, that is, a final cadence.

The first part is slow and is called lafrâsh (literally: the bed, the bottom sheet). It begins with a musical introduction that prepares the entry of singing. Often the introduction is a taqsîm, then an exposition of the sung theme without strict rhythm. The principal phrase of the song is repeated from start to finish; in the second part, it undergoes only small changes.

The fast-paced second section is called ghta (blanket). Here, the rollicking rhythm drives the dance. The latter is regular, calculated - for this reason it is called hsâb (literally: calculation). The youngest of the chikhât performs before the audience sensual dances (play of the belly and hips, undulating and quivering of the body, swinging of the hair…), then the singing restarts with a dialogue between the main chikha and the rest of the chikhat and musicians.
Posted by tim abdellah at 10:58 AM