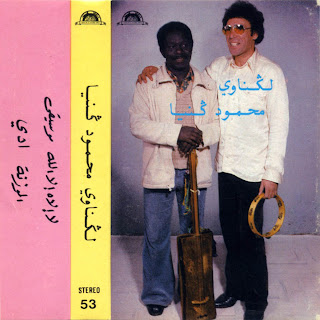 M'allem Mahmoud Guinia of Essaouira was for years the most well-known Gnawa musician inside and outside of Morocco. (In recent years, Hamid el-Kasri of Rabat has become the Gnawa musician most often seen on national TV broadcasts in Morocco). He has released scores of cassettes and CDs in Morocco, some featuring the traditional ensemble of guinbri and qraqeb, some incorporating additional instruments and textures into the mix.

For this session, M'allem Mahmoud brings a full Gnawa ensemble with guinbri, qraqeb and spirited choral responses, and adds a funky trap drummer who never, ever stops. Ever. Don't look for subtlety here. This tape hits the ground running and maintains a sprint from start to finish.

Also, don't look here for tunefulness. Other than at the end of track 3 (for the imported Aissawi version of "Lagnawi Baba Mimoun"), the vocals are never in tune with the guinbri. Between this and the in-your-face hi-hat and drum rolls from the anonymous trap drummer, this tape might be a rough ride for some listeners. But Mahmoud's singing (despite the tuning issues) is high-spirited and energetic, as is that of the choral responders. And the drum kit, while punctuating incessantly, is always right in the pocket. It's a blast!

The songs on this tape are drawn mainly from a repertoire the Gnawa call "Soussiya". Soussi is a Moroccan rhythm characterized by alternating duple and triple subdivisions of a 6/8 measure. It's the most popular and ubiquitous rhythm across Morocco. At the end of Gnawa derdeba ceremonies, musicians segue from the trance repertoire to "popular" (i.e., not part of the ritual repertoire) songs in this rhythm, and anybody that is still present and awake (since this usually occurs long after dawn) is welcome to get up and dance. The first couple songs of track 1 belong to the Yellow trance repertoire, and the rest of it is an incessant Soussi jam. Tracks 2 and 4 are also Soussi songs, while track 3 includes trancing songs.

I heard this tape originally in '92. (I believe my traveling companion JH bought it and later gifted it to me.) The j-card reads only "The Gnawi Mahmoud Guinia". The smiling, bespectacled tambourine man, whom we assumed was the drummer on the session, is not identified. JH dubbed him Warren Beatty, and for us this became the Mahmoud Guinia and Warren Beatty album.

Tracks (titles from my transcription, not from j-card):