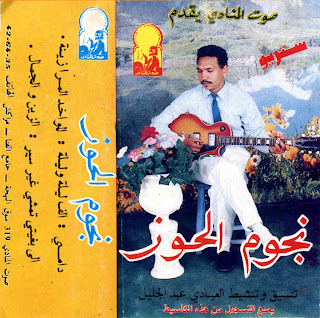 Listening to Moulay Ahmed Elhassani got me thinking about Moroccan guitars, so I dug out this tape. This is straight-up aita, the most deeply-rooted and beloved rural Arab genre of Morocco. Like the Elhassani tape, this uses an electric guitar in place of a traditional instrument - here, it would normally be a violin (kamanja) - and a drum kit to augment bendir and ta'rija hand drums.

Aita recordings usually feature the name of the lead female singer (shikha) and/or the leader(s) of the musical ensemble (Sheikh so-and-so, or Ouled such-and-such). Noujoum El Haouz ("Stars of the Haouz") gives no names, and features only a picture of the guitar player on the j-card. An unusual configuration.

Though a bit of an oddity, the tape has a great feel to it. The alternating female lead vocals are great, and I love the way that fills on the drum kit punctuate the ends of phrases. Also, it's great to hear the violin riffing of the aita transposed to an electric guitar! Gives it a different rhythmic impulse. I'll try and get some trad aita up here in the near future.

BTW - this is a digital transfer of a tape that I dubbed from a well-loved tape that was lying around someone's house in Marrakech in '92. Side 1 sounds better than side 2. But you get a nice verité at the beginning of track 3 where someone in the house pressed record instead of play and recorded over part of the track. I wonder why Moroccan commercial cassettes were never sold with the tabs punched out to prevent recording over them.

BTW2 - notice again here extra frets added to the guitar for the quarter-tone intervals.
Get it here.
Posted by tim abdellah at 3:44 PM