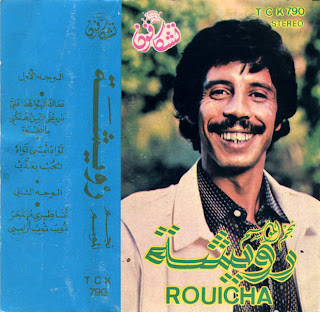 This is my fave, most jamming Rouicha tape. The Middle Atlas izlan genre is the bluesiest of Berber genres to my ear, and Rouicha makes the lotar talk like no other. By recording in both his native Tamazight and in Moroccan Arabic (as in this tape from the 1980s), Rouicha popularized this groove across the Moroccan population.

Rouicha is so cool that, like with James Brown's record labels, he gets his picture not only on the cassette sleeve, but on the shell too. 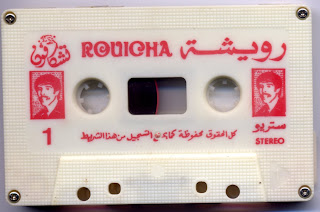 Active since the 1970s, Rouicha continues to pump out the tapes/CDs/VCDs. There are dozens. Last time I visited the Comptoir Marocain de Distribution de Disques, which is also the Tichkaphone records headquarters, I was told there were still 30 albums in the can, ready to be released. They never stray far from the formula - deep, round lotar tones contrast with the insistent rattling buzz of bendir frame drums, and Rouicha's earthy baritone voice alternates with the piercing responses of the female backup singers. Why mess with a good thing?

There's loads of good Rouicha on YouTube, but not much of his music has been released outside of Morocco.