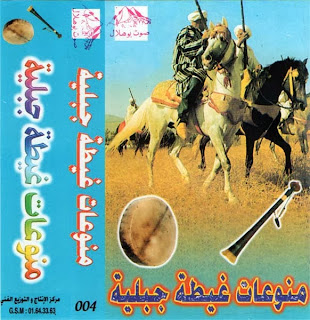 More sounds from northern Morocco this week. It's Ghaita Jbaliya:
Oboe and drum ensembles are found all over North Africa - it's a perfect ensemble for outdoors, where the shrill piercing tones of the ghaita (or zorna in Algeria and further east) announce the presence of festivities. The typical accompanying drum is the tbel barrel drum, as shown below. (The bendir pictured on the j-card above seems to be a mistake.)

The Stash has previously featured some ghaita music in a post on Aissawa music here. Ghaita and tbel groups can be found all over Morocco, and the particular music played depends on the surrounding regional traditions. Thus ghaita jbaliya features melodies and rhythms particular to the Jbala region. Dig, for example the characteristic 9/8 rhythmic pattern that opens track 1 (embedded at bottom of page).

Though ghaita jbaliya is a regional folk tradition, it was, curiously, one of the first Moroccan musical genres to be exported and consumed in the West, courtesy of the Master Musicians of Jajouka and the Bryon Gysin/Brian Jones/Rolling Stones connection. (See Philip Schuyler's article "Joujouka/Jajouka/Zahjoukah. Moroccan Music and Euro-American Imagination" for the definitive analysis of that story/phenomenon.)

By the way, if you've wondered about the images of rifle-wielding turbaned horesmen seen on this cassette and others (e.g., here, here, and here), that's a representation of tborida (also called "fantasia"). It's a type of performance that takes place at tribal gatherings (moussem-s), and sometimes at very big weddings or other social gatherings. In my understanding, it stands as a symbol for Moroccan Arab rural-ness. 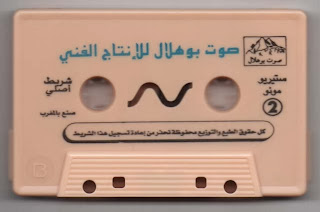 And lastly, I love the cassette imprint of "Sawt Bouhlal" (the voice of Bouhlal) - Bouhlal is a mountain in the region of Al Hoceima (n the Jbala region, of course).