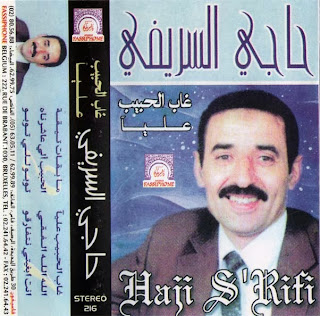 My stash is stocked mainly with tapes from central Morocco - Marrakech, Beni Mellal and Rabat being the primary triangle points of my Moroccan travels. However, I do have a handful of tapes from northern Morocco. The last time I was there was in 2001, and I tried to pick up things that were unavailable further south. I know much less about the northern artists and traditions than I do about the central and southern ones, so I relied on friendly tape vendors to steer me toward what the north has to offer. I'll do what I can to provide some context for these tapes.

I'll start with a nice tape from the artist Hajji Srifi. According to Yala.fm, he was born in the 1940s, has been recording since as early as the 1970s, and is based in the area of Al Hoceima, on the Mediterranean coast.

The music on this tape sounds to me like chaâbi with a northern, specifically Jbala flair. The term "Jbala" can refer to either the mountainous region of northwest Morocco or to people of the Arabic-speaking tribes of that region.

Most tracks on this tape (except track 6) fit into the basic 6/8 groove structure found across Morocco. And the prominence in the mix of keyboard, violin and percussion set it within a typical chaâbi soundscape. However, a Jbala tinge can be heard through a few sonic markers drawn from a couple of Jbala musical genres: Taqtouqa Jbaliya and Ghaita Jbaliya (more on these in the next few posts).

In the title track (embedded toward the bottom of this post), for example, the opening keyboard timbre mimics that of a ghaita (oboe), such as one would hear in the ghaita jbaliya genre (made famous outside of Morocco by the Master Musicians of Jajouka). The vocal melody of this track reminds me of the mode and contour of taqtouqa jbaliya melodies (see YouTube video below, starting around 2:04).


Elsewhere on the tape, other Jbala signifiers can be heard. The oud and small guinbri (or gnibri) used in taqtouqa jbaliya can be heard here and there. (Listen to the very very beginning of track 4 to hear the high-pitched little guinbri.) And something about Hajji's style of vocal vibrato seems typically Jbala to me. See especially the intro to track 6 to hear this vocal quality. Track 6 finishes out the album in the loopy 9/8 taqtuqa rhythm.

As you can see from the video above, Hajji Srifi performs not only in chaâbi-style but also in more traditional modes (and costumes) than this tape and his suit-and-tie photo alone might suggest. Yala.fm has a large number of his more recent albums streaming and downloadable here. Some are more traditional sounding, others incorporate the trappings of modern chaâbi, But all of them are rooted in that Jbala sound. Moroccan Tape Stash gives a big thumbs to this great sound, and thanks those tape vendors in Tangier for doing me right!