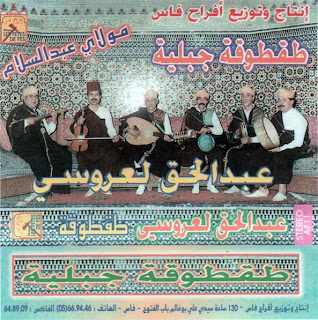 The last of my Jbala offerings is some relatively trad taktouka jbaliya from Abdelhak Lâaroussi. I say "relatively" because the ensemble does feature a light keyboard bass in addition to the traditional bendir, darbuka, tar, oud, viola and guinbri.

About the genre, Ahmed Aydoun writes that the name taktouka jbaliya, while commonly used, is contested and that purists still prefer the name âita jbaliya. He continues:

"This rather particular âita is placed by its practitioners under the spiritual guidance of the patron saint of the Beni Âros and the Jabal al-Âlam, the [spiritual] pole Mulay Abdessalam Ben Mshish. There is no âita in which he is not cited." (1)

I love the little guinbri. You can see it held by the gentleman at the far left in the photo above. I own one and play it when I have a chance. A violin-playing colleague dubbed it the "plinkophone" because of its distinctive "plink plink plink" timbre.

I also love the loopy 9/8 (3+2+2+2) rhythm (also heard in my previous Jbala posts). In a full performance of taktouka, the 9/8 gives way to a 5/8 section and ultimately ends up in 6/8. You can hear this progression on the Musique du Monde album "Maroc: Taktoka Jabalia", in particular on the track "Aita Jabalia". On my tape, you don't get that progression, but you do get 40 glorious minutes of non-stop 9/8

More love - the Jbala rock the brown jellaba, wearing one sleeve on and one sleeve out. What a great look!

This tape again comes from my 2001 visit to Tangier. All the Jbala tapes I picked up were issued by companies based in Fes, which is not part of the Jbala region, but is apparently far enough north to be a center for the recording and production of Jbala music. Interestingly, I also picked up a few Riffi tapes on the same trip (coming soon to the blog), and those were all issued by companies based in Nador. 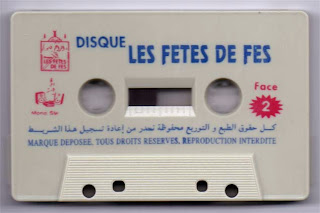 This particular tape was issued by "Disque Les Fêtes de Fes". Can anybody tell me what this logo signifies? It looks like a craftsman's hammer of some kind. I will update this post if I figure it out.

Regarding the artist Abdelhak Lâaroussi, most examples of his music that I find online are in a chaâbi mode, though with a Jbala flavor. Yala has several recent albums of his. I'm happy to be able to show a different side of his work.