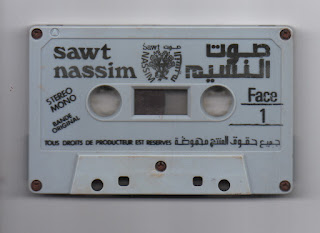 Well here's something old yet different - it's a tape of songs by lotar-master Rouicha, performed by a 1980s chaâbi orchestre - viola, drum kit, and darbuka, and driven by an electric guitar! I was just remarking a couple weeks ago how Middle Atlas lotar songs work so well in a chaâbi context and vice versa. Here is more evidence (apologies - the audio quality is not the best, but the grooves are so good!):

The vibe here ☝️ reminds me somewhat of the âita-based guitar-driven sound of Noujoum el Haouz. The drum kit is similarly propulsive, and the darbuka and viola pull the track toward the âita sound world. On another track 👇 however, the âita/chaâbi stylings fall away - there is no viola, the singing is in Tamazight, and the drum kit and darbuka switch from chaâbi propulsion to a laid-back Middle Atlas swing. This foreshadows a bit the flangey acoustic guitar-driven Middle Atlas grooves that Moulay Ahmed el Hassani would popularize a few years later.

Unfortunately, I have no idea who are the musicians on the cassette or from where they hail. The Sawt Nassim label was (is?) based in Casablanca, but that doesn't guarantee that the ensemble was based there. I hope someone in YouTube comments can identify the musicians! 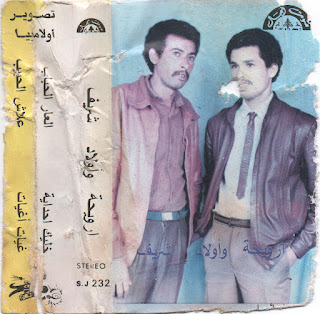 By the way, this cassette came to me from Essaouira (shukran T!) with the j-card pictured at right. I was looking forward to hearing it - the duo Arouiha and Oulad Cherif were featured in this old post over at Awesome Tapes From Africa. Was disappointed that the tape did not match the j-card. Luckily, the Sawt Nassim tape it housed is pretty great. Still - that leather tie!


The songs on side B of this album are both featured on Rouicha's fabulous album TCK790, still available here: https://moroccantapestash.blogspot.com/2011/06/mohammed-rouicha-afak-al-hwa-hda-liya.html. I couldn't identify the first track on side A, but the second track, 'Mani L3ahd Mani L3zazit' (featured in the YouTube clip above) can be found on YouTube in several versions, one of which is attributed to Rouicha. (There's no discographic information, but a YouTube commenter claims it was recorded by Rouicha in 1981). It clearly remains a well-known song, as one can find versions of it performed by many artists on YouTube.


Editing note: Side A and Side B of the tape both end with instrumental intros, and both sides begin with intros cut off. So I grafted the intro from the end of each side to the first track on the other side.