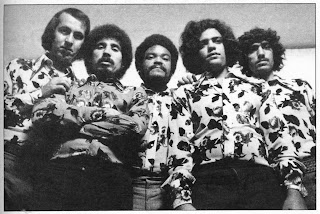 Nass el Ghiwane - what can I say. Like trying to introduce rock and roll in one blog post. They set the world of Maghrebi music on fire in the early '70s. Fierce, driving rhythm. Trenchant resonant lyrics. Fiery group singing, heartbreaking solo singing. Archaic and modern, subversive and traditional. And, to the best of my knowledge, the first time the now ubiquitious Gnawa guinbri (or sintir or hajhouj or whatever name your prefer) was used in a popular music context.

The most long-lived incarnation of the group was from '74 to '95, as a quartet with Larbi Batma (tam-tam & vocal), Omar Sayed (bendir & vocal), Allal Yaala (snitra & vocal) and Abderrahmane "Paco" Kirouche (Gnawa guinbri & vocal). Most of the available classic recordings of the group (like this and this) feature this lineup.

The original, mythic lineup thru '73 was a 5-piece featuring Larbi, Omar and Allal plus Moulay Abdelaziz Tahiri on guinbri and Boujemâa H'gour on da'du' and vocal. Boujemâa is remembered as the fire and spirit of the group in these early days. The group's first recordings feature this lineup. They are often hard to find, but have recently been reissued as the first 7 tracks of this collection.

After Tahiri's departure in '73 to join Jil Jilala, Paco joined the group, which remained a 5-piece until Boujemâa's untimely death in '74. This lineup is pictured above. Some of the classic songs of the group's repertoire date from this period but can be found only in re-recordings by the later quartet (or, worse, by the group after Paco's departure in '95 and/or Batma's death in '97). I have never once seen a release of the recordings of this quintet on cassette or CD.

Yet several singles and an LP were released by the '73-'74 quintet. I've run across this single a couple of times: 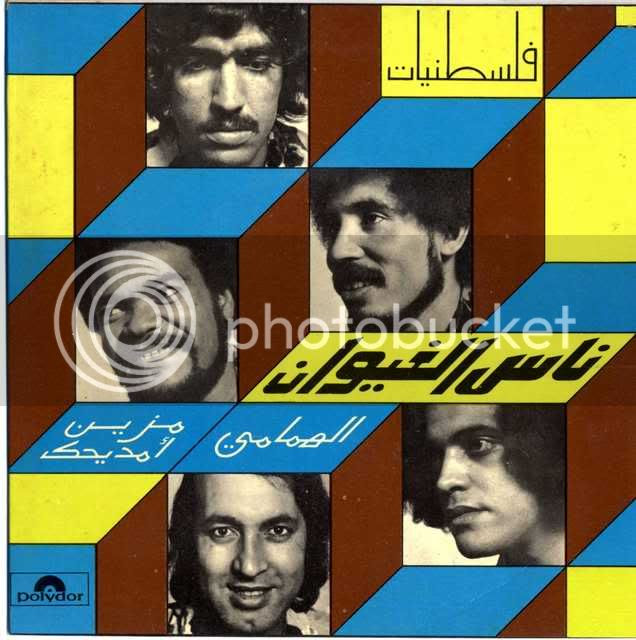 And on one occasion I saw a full LP featuring this line-up. The design of the album cover looked similar to the single shown here. The LP was in a shop in Marrakech in Riad Zitoun. If you've ever looked for vinyl in Morocco, you know that most stores that own vinyl will not sell it to you, but are happy to record it onto cassette for you.

Here's a digital transfer of my cassette copy of the Marrakchi shop owner's vinyl copy of the 2nd Nass el Ghiwane album. All of these songs were re-recorded by the quartet after Boujemâa's death, and some of them were released on an album called "Hommage à Boujemâa". It was particularly moving for me to hear this version of "Ghir Khoudouni", with Boujemâa singing the final verse:

In later recordings and performances, Omar would sing that verse and add the line "Boujemâa doesn't die".

I'm not convinced that Paco is on all of these tracks.  He's definitely on "Ghir Khoudouni" (both singing and playing. Some tracks feature no guinbri at all, and the guinbri playing (and tuning) on "Youm Malkak" sounds like Moulay Abdelaziz Tahiri.  But Boujemâa's great singing can definitely be heard singing on all tracks. (He's the one that sings the solo portions at the opening of "Lahmami")

I have no idea why these tracks have never been reissued.  Luckily, you can get them here.
And there's more Paco here and here.

UPDATE 3/24/2013:
I just ran across these images online - someone was selling a vinyl copy of the album in France, and uploaded the following images: 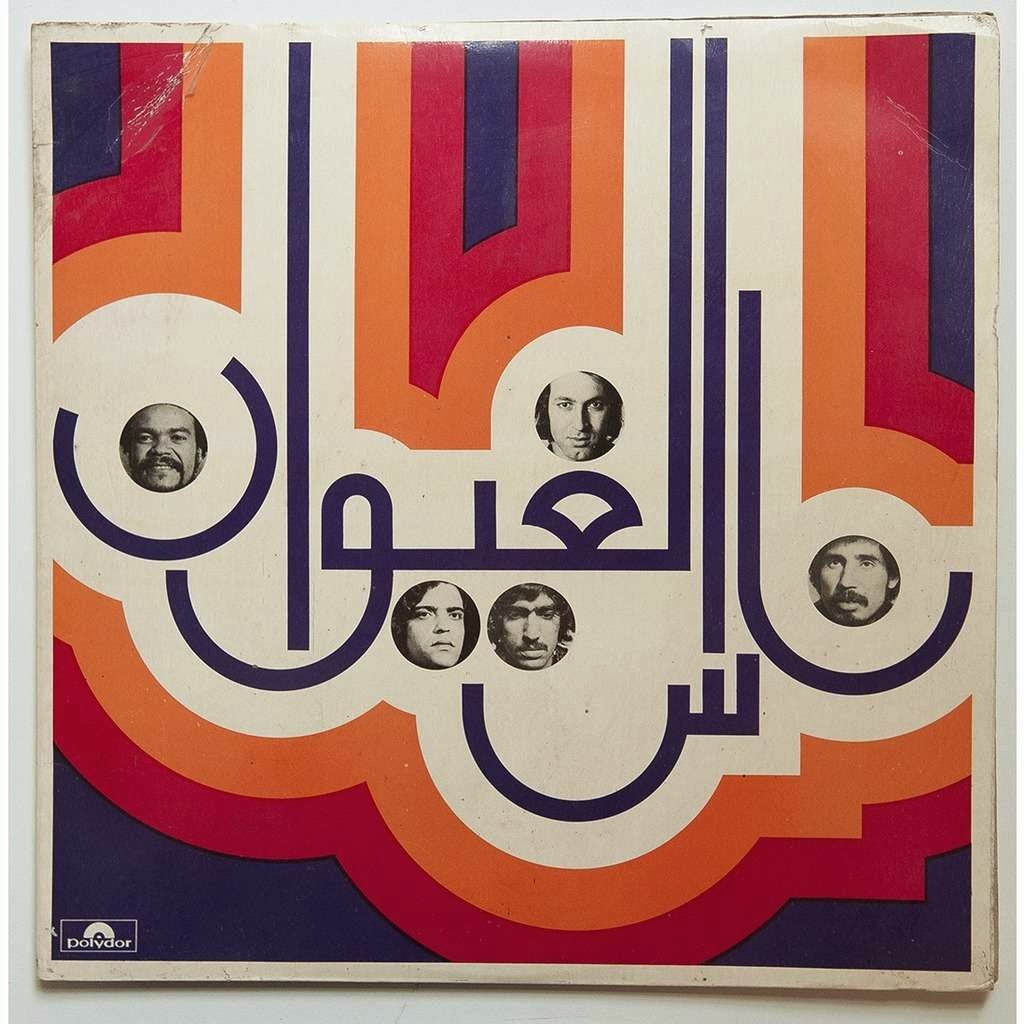 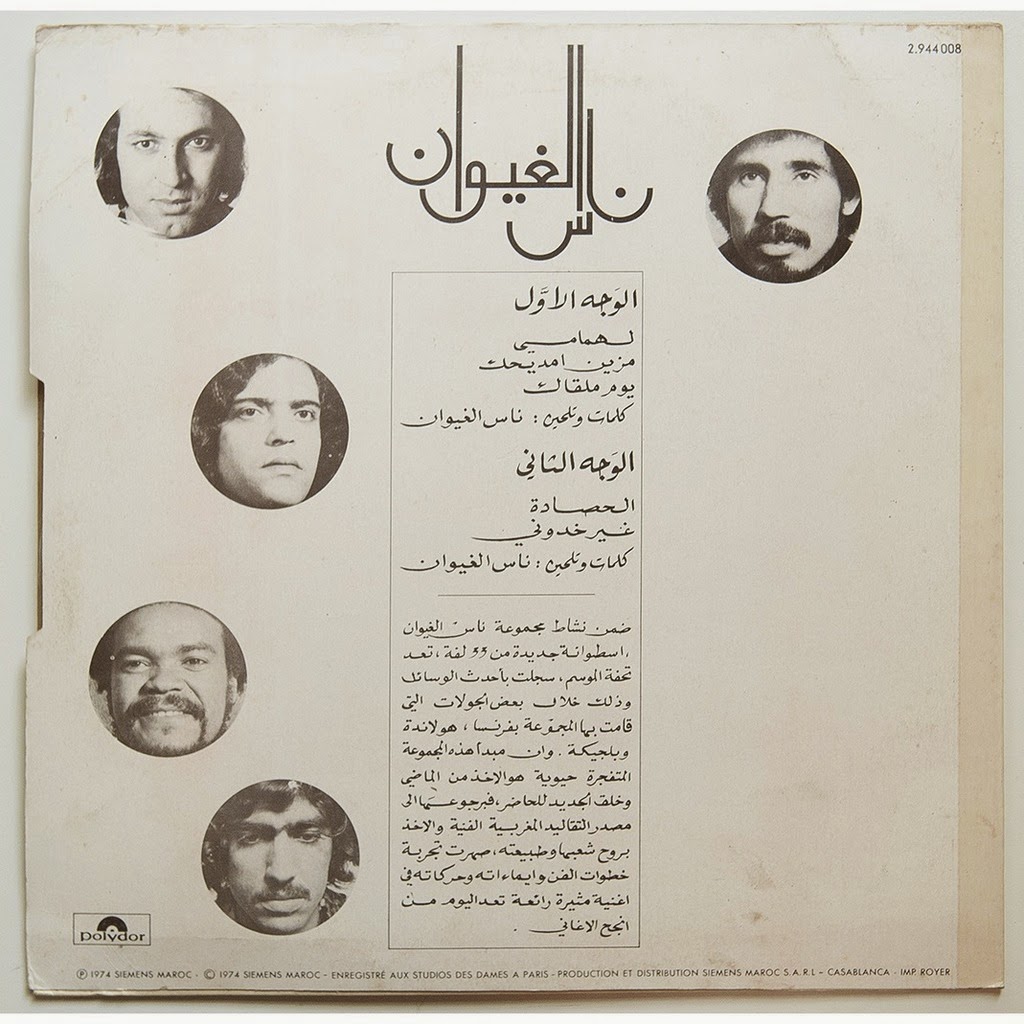 This is not the cover I remember seeing in the Marrakech shop, but perhaps my memory is hazy. Or perhaps this is an alternate cover - I could have sworn the album looked like the Polydor 45 pictured above.

At any rate, it looks like the running order of tracks is as follows:

Which means "Ya Sah" was a bonus track that the Marrakchi shop owner added to the tape. Indeed, it does sound like it comes from a different slab of vinyl than the other tracks. A non-LP 45 then?

Twinge-of-nostalgia-for-bygone-audio-technology-days note: For those of you who used to copy LPs onto cassettes for friends (or receive such dubs from friends), remember when you'd have a 45 minute side of a tape and the album would only be 37 minutes long and you would search for 2 or 3 perfect bonus songs to fill up the blank space at the end of the tape? Such were the joys...
Posted by tim abdellah at 2:57 AM