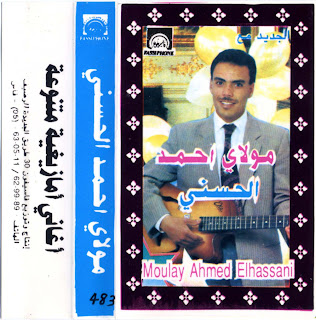 Glad y'all enjoyed the Rouicha cassette. I had some requests for more from this genre. I've got some more good Rouicha, but thought I'd offer this one up first. Same genre (Middle Atlas izlan), same bluesy groove. Moulay Ahmed Elhassani does it using a slinky, phased-out electric guitar instead of the lotar, and drum programming (or a really tight rhythm section of a single bendir, darbuka and drum kit) instead of the bendir section.

Does it still jam? Oh yes! Unlike many Moroccan genres where increases in tempo are typical over the course of a song, izlan tend to set a groove and tempo right at the beginning of the song, and stick to it all the way through. So the drum programming (if that's what it is) works pretty well. And the guitar sounds great - psychedelic, but using almost the same phrasings you'd expect from the lotar. Though if you pay attention, you'll hear the occasional string-bending (e.g., the fade-out of track 2) that you can only get on a guitar.

BTW1 - On the cassette cover, I'm pretty sure I can spot an extra fret bar on his guitar (at the far right of the photo), which lets him hit the quarter-tone pitches when he needs them. 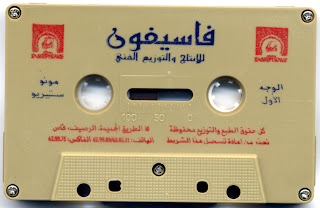 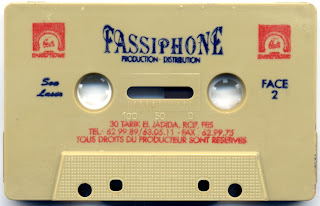 This tape dates from around 1997. The early tapes of his that I heard were all in Tamazight. Apparently he records and performs in Arabic as well, as in this TV performance (which features an odd looking instrument - appears to be a 6-string guitar converted to use 4 thick strings - like the lotar):